Evolve is a game with a bunch of DLC. If you were to buy all its optional hunter characters, you’d be set back £32/$40. But I’m here to tell you that you can play that DLC without spending a penny, thanks to this one weird trick that a young games journalist learnt while playing Evolve this week.

For some more great bullet-spraying action, try one of the best FPS games on PC.

It’s the game’s first anniversary today, and to celebrate I headed back online to see how Evolve is doing one year on. And while things were mostly as you’d expect for a game with basement-level player numbers, I did discover that you can play as DLC hunter characters simply by trading places with AI bots.

The problem Evolve currently has is that the low player numbers (just a few hundred at any one time) means that the majority of games you join are not full. To brings the teams up to the right numbers, the game fills hunter slots with AI teammates. The bots can pick from the full range of hunter characters, DLC or vanilla, and that’s where things get interesting. 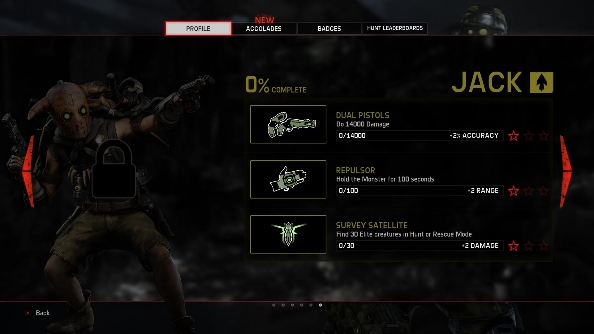 When in game, if you feel the desperate need for a medic, but the medic is an AI and not really doing the job well, you can simply tap the relevant number key to take over that role and swap positions with the bot. If the bot you’re trading places with is a DLC character, well hey presto: you’re suddenly playing a class you haven’t paid for.

The limitations on this is that it has to be done in-game: when selecting your hunter at the start of a match the DLC you haven’t paid for will be locked. But provided the AI selects DLC team members, which it often does, when you’re on the ground those cool new weapons and skills are all yours.

The loophole only applies to hunters too: if you play as the monster you have to lock in before the game starts, and as there’s only one monster in the game there’s no AI bots to trade places with.

Will you be logging back onto Evolve to try out some hunters you don’t own? I recommend Lennox, an absurdly heavy Assault class in house-size power armour.