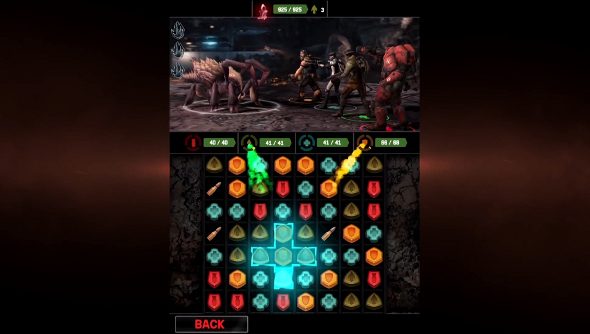 After Evolve launches next month, there will inevitably come a time when you can’t play it. Maybe you’re stuck on a bus. Perhaps you’re spending some quality time with your toilet. Whatever the reason, you won’t be off gallivanting on alien worlds.

2K has you covered. When you’re not able to play the game, you can play the companion app, Evolve: Hunters Quest, on your phone. It’s a match 3 puzzle game. With microtransactions.

You surely know the score: match three icons of the same type, pull off an attack, damage the enemy. It’s the same kind of match-3 battles you get in the Puzzle Quest series.

So where does the companion app part come in? Well, you’re not just fighting because you love match 3 games with small microtransactions – though you very well might.

A victory confers mastery points, which can be transformed into mastery boosts for the main game. So you can level up a character’s mastery without even playing Evolve.