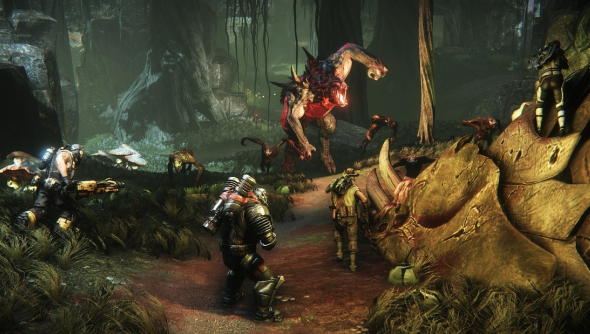 After CD Projekt announced the demanding system requirements for The Witcher 3 you might have been worrying that every game of 2015 would be out of reach of your PC. Fear not, Turtle Rock’s asymmetrical shooter is comparatively forgiving (except for your hard drive).

If you’ve got the power, Evolve will let you scale up its visuals to an impressive 4K resolution.

There is a hitch, though.

I had a Core 2 Duo E6600 back in 2006. It’s a testament to Turtle Rock’s optimisation work that they’ve got their blockbuster shooter running on an eight-year-old processor. In relative terms, that processor could read any of the Biff, Chip, and Kipper books without any help from an adult.

If you want Evolve to look a tad fancier then you should aim for these recommended requirements:

That core i7-920, while a more powerful component, is only six years old. It would barely be into year two of primary school. I doubt it would recognise that Biff’s dog, Pat the Dog, is an excellent pun. Unlike the more mature E6600.

Turtle Rock’s given you a lot of options when it comes to tweaking the visuals of Evolve. Texture Detail, Shader Detail, Model Detail, Shadow Quality, Particle Quality, Anti-Aliasing, Tessellation, VSYNC, and Resolution can all be fiddled with to get you the best looking, fastest running game your PC can handle.

Evolve’s release date is pegged for February 10, 2015 so we’ve not long to wait now. Watch the release trailer to tide yourself over until then.