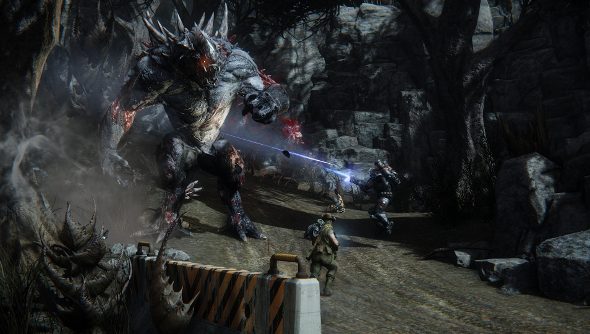 In the constant battle between man (with the occasional robot) and monster, it looks like the monster is winning just a wee bit. Turtle Rock Studios has released the stats from Evolve’s first week, and while the numbers suggest balance, monsters seem to kill hunters marginally more than they, themselves, are killed. This is based on almost 6 million matches.

Here are some big numbers for you:

Match lengths seem to vary wildly, depending on the team. A smart monster player can keep a disorganised group of hunters running around in circles for the better part of an hour, but I’ve seen monsters caught in arenas and slaughtered in around five minutes. Turtle Rock says that the average match length is 9:46 minute, and it takes on average 2:23 minutes for hunters to find the monster.

Out of the almost 6 million games played, monsters have won 51.9 percent of them. It’s close. It looks like, however, that’s mainly down to hunters letting the monster reach stage 3 of its evolution, though. Stage 1 monsters win only 11.2 percent of their matches, while stage 2 monsters win significantly more, at 47.8 percent. But it’s the deadly stage 3 monster that reigns supreme, defeating hunters in 76.6 percent of matches.

Take a gander at the infographic for all the stats and, while you’re at it, Matt’s Evolve review.