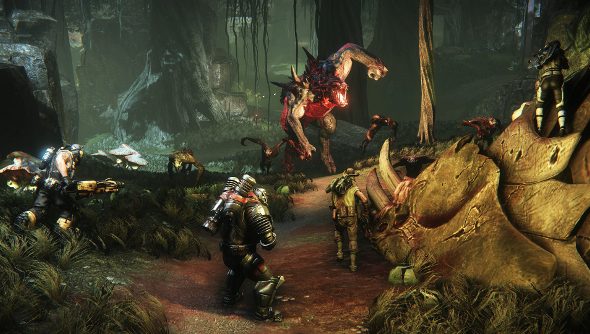 The war between monster and hunter in Turtle Rock’s Evolve is over, and has been since November 4th, which has given the studio enough time to delve into the records to find out which side won the war, at least in the alpha.

Hunters have been proclaimed the champions, by almost 200,000 victories.

Evolve’s infographic shows that hunters claimed victory 753,414 times, compared to the monster’s 574,079 times. This is probably a bad outcome, as I can’t help but shake the feeling that the hunters are the bad guys here, travelling to an alien world to murder a big animal.

Out of all the classes, the infographic reveals that the assault class was the most popular, which makes sense as it’s also the most straightforward – though it’s not without its interesting quirks. Close behind in popularity is the poor, victimised monster.

The matches I played varied a lot when it came to length. In a group of hunters, I witnessed a victory in less than five minutes, with us trapping the monster between buildings, where we were able to assault it from above. Others became long, drawn out chases through the jungle punctuated with moments of quiet where we tried to get a bead on our quarry.

Apparently the longest match was 40 minutes long, and it must have involved a lot of running around.

Did any of you lovely lot get a chance to take Evolve for a spin?