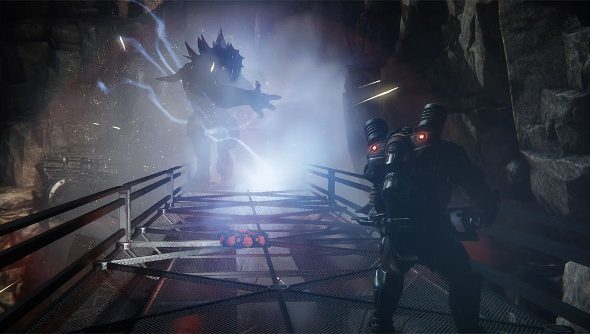 You might have seen a lot of people talking about the Evolve alpha this weekend (and perhaps complaining about some of the matchmaking issues that come with being an early version of the game). 2K initially reserved the alpha for players who had keys for it, but now it’s open to any veterans of XCOM.

2K community manager Stephen Reid made the announcement on Evolve’s Steam forum. Lo and behold, if you already own XCOM (and you really should), then you will find Evolve listed in your games library.

If you’re at all interested in this, you want to jump on it fast. The Evolve alpha runs through today but they’re wrapping it up at 4 AM UK / 11 PM Eastern. EDIT: NOPE, it goes unitl Tuesday now. See below.

The Alpha gives you access to three levels: Fusion Plant, The Dam, and Distillery. You’ll also get to play around with the progression and unlock system, which is good or bad news depending on how you feel about these things. While you can get access to all eight of the hunter characters, you’ll only start with four. You’ll also be able to play as the Goliath and Kraken monsters. Of these two, I recommend Kraken. It’s way more interesting than Goliath. Besides, House Greyjoy needs all the help it can get.

The rest of the vital info is found in the FAQ for the Evolve Alpha.

I’ll cop to being an Evolve skeptic. I played the game at PAX East and again at E3 and came away underwhelmed each time, but they’ve had months to improve on the game’s promising premise. While I found Evolve to be a little too limiting, in the way that boss battles usually are, the idea of making an asymmetric multiplayer game where it’s hunter vs. a very dangerous hunted is really exciting. 2K wisely delayed the game until February, giving developer Turtle Rock to refine their idea.

Anyway, go on and give the game a shot and see what you think about the heavily-armed monster hunting. Your PC can probably handle it.

Just remember: stick together and keep kiting. And make sure you deploy that mobile arena trap, or the monster WILL sneak off, eat some prey, and turn into more of a badass than you can handle.

UPDATE: The Alpha has been extended to Nov. 4, 8 PM UK / 3 PM Eastern. This is presumably to deal with the PS4 users who couldn’t get into the Alpha thanks to a disastrous update. THANKS SONY!