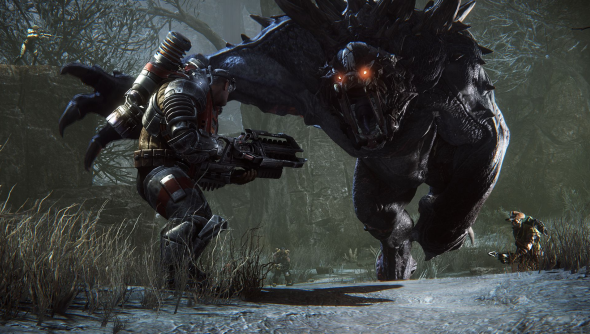 Evolve is a game that pits you and three friends against aliens who have grown much bigger and developed organic weapons that make them much better.

Turtle Rock’s released a trailer which shows the day in the life of the exterminators sent out to fight these bigger, better beasts.

The video is actually the intro video for Evolve:

The main advances in exterminator technology are those fancy jumpsuits and shield systems. Though the team in the video are clearly traditionalists, using the tools of the exterminators of old – submachine guns and flamethrowers.

It’s good to see the old ways are best. I mean, even in Evolve’s fancy future where spaceships can fly exterminators across the galaxy to take care of pests, they’re still using bug bombs to clear an infestation. Granted the bug bombs are ordnance dropped in from orbit with enough power to level Buckingham Palace.

Evolve’s release date is set for February 10. You’ll be able to strap on your very own exterminator’s sniper rifle then.