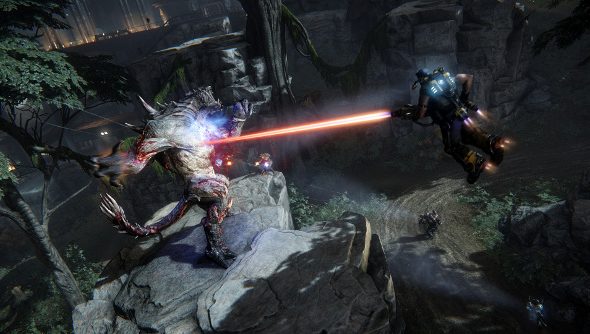 I can’t shake my skepticism about Evolve.

It kills me to say that. I adored developer Turtle Rock’s Left 4 Dead games, and I love the concept of an asymmetric multiplayer FPS. But with games against both the revealed monsters under my belt, I keep running into the fact that Evolve seems less like a fresh new take on multiplayer and more like Left 4 Dead: Nothing But Tanks.

I think I understand where Turtle Rock are coming from with Evolve. Thinking back on Left 4 Dead’s multiplayer, it could be frustratingly inconsistent. By design, the human survivors had major advantages: firepower, health, range, ease-of-play. The special infected could overcome these advantages, but it required employing all of their special abilities in concert at the right opportunity. That level of coordination was tough to achieve via random matchmaking.

Evolve tries for a simpler kind of asymmetry. Instead of a bunch of monsters with special powers, you get one superpowered, player-controlled monster. The monster’s approach doesn’t have to be so subtle, because it’s basically a boss monster with a ton of hit points and a kick like a mule. Meanwhile, the four human players do their standard co-op thing.

It’s a neat idea, a game of cat-and-mouse where the hunters can eventually become the hunted. The trouble is, I never feel Evolve offered me much flexibility. My sessions with Evolve felt very rote, and more than a little dull. Each is so narrowly prescribed that there’s hardly any room for me to add anything to the process. I was a cog in a simple machine.

Now, I’ve only played Evolve at PAX East and at E3, and neither show is a great setting for appreciating a multiplayer game. With developers shouting instructions at the team (Stay together! Okay, there he is, use your harpoon! Use your harpoon! Medic, you need to be healing!), you don’t get much of a chance to explore Evolve’s possibilities.

But after two sessions, I’m still not really clear on what those possibilities are. The hunt phase is so straightforward that it turns into a simple chase. The monster leaves big glowing footprints and you run after them, and occasionally get a more timely prompt that the monster has scared some birds or wildlife, giving you a better idea of its location. In essence, then the squad of hunters just stick together and run along the monster’s path, hoping to nab it before it can evolve into a stronger form.

I keep waiting for this segment of the game to turn into a cool hide-and-seek, but I’m not sure Evolve really allows for that. There are so many incentives for the hunters to stick together that the monster likely won’t fare well if it attempts an early battle. Its best play is to just keep running and hiding, and I’m not sure I like that dynamic. 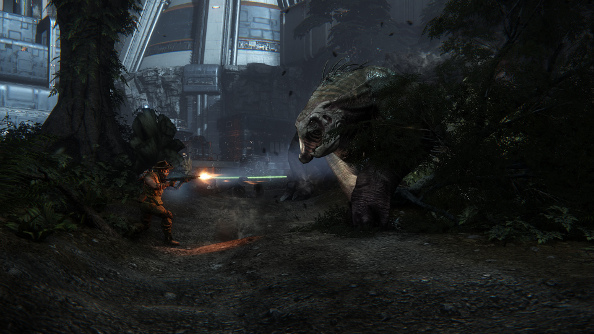 If the players can force an early fight with the monster, they have a huge edge, which means the first act of a game doesn’t really offer any interesting decisions. Should the medic and the support gunner split off from the group to go check out that cavern? Hell no! Should the monster turn and fight while they players aren’t looking? Nope, it should just go and snack on some wildlife and try to power-up.

Then you find the monster, gang up on it, and try to kill it. And I’m not sure I see what else there is to it. The boss is a bullet-sponge and, controlled by a person or not, there’s only so much nuance to fighting a giant in a death arena. It hits really hard, so you run when it focuses on you, and meanwhile your three teammates just hammer it with shots and special abilities.

One of those special abilities is the Mobile Arena, which is a power the Trapper character uses to pin the monster inside a large forcefield with the players. This prevents it from making an escape, and gives both sides a lot of room to run around. But by confining the action in this way, both my games of Evolve have degenerated into a lot of circle-strafing. Just like a generic boss battle against any old-fashiond AI goon.

Each journey through Left 4 Dead told a story. That’s why I kept coming back. But Evolve seems to tell just one story, and it’s one I find kind of boring, “There was a big monster and we cornered it and shot the shit out of it.”

The new monster that was revealed at E3, the Kraken, was at least more interesting. The Kraken was a little more maneuverable thanks to its flying abilities, and its lighting-attacks definitely forced players to show it a little more respect at range than the Goliath that made its debut at PAX. But it just didn’t seem like there was enough for any one player to do in Evolve. Especially after the Mobile Arena was deployed, Evolve was far too much of a slugging match to hold my interest. 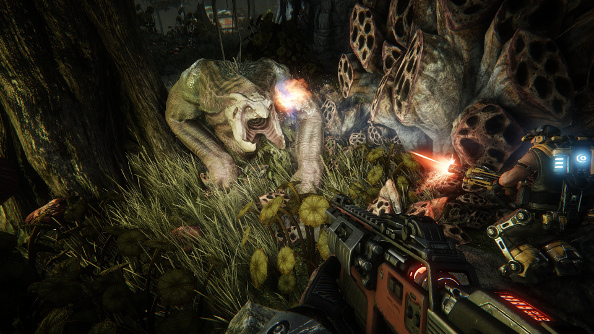 I’m hoping my lukewarm reaction is really product of the trade-show format, and that a typical hunt will feel less straitjacketed than what I saw at PAX and E3. There is a lot we don’t yet know about the story, and I suspect that the final game will probably do more with environmental storytelling and pacing to open up the experience. But for now, I can’t get around the fact that nothing about Evolve seems as interesting as its premise would suggest. Hunter or hunted, I keep coming away from Evolve feeling trapped.