Gaming chairs are, it has to be said, faintly ridiculous. They’re luxury items for the gamer that already has it all, and wants to find something else to spend their money on. But they can also really make a difference to your gaming experience, especially when you’re in it for the long haul… They’re not essential, but admit it, you want one.

And, as a larger gentleman, I have to say it’s nice to see that gaming chair companies are starting to cater for their more portly, some might say ‘jolly,’ customers. The EWin Flash XL is just such a gaming chair, with the Chinese company proudly boasting of its “quality, but cheap office gaming chairs.” But one thing the Flash XL isn’t is cheap…

Comfort is one thing, but what about performance? Check out our pick of the best graphics cards around today.

At $449 (£364) it’s not exactly pocket change, but given the sheer expanse of PU leather on offer with the Flash XL maybe that’s not such a high price to pay. Maybe. But considering the Noblechairs Epic I use on a day-to-day basis in the PCGamesN office is under $280 (£300) – though for a standard size – it does look a little pricey on the face of it.

EWin originally started out as an OEM office chair manufacturer, before being newly minted as EWin Racing in 2016 to make its own brand products rather than simply making them for other people.

The XL is the largest chair EWin makes, carving out an extra 5cm for the more expansive of deriers, and expanding the shoulder support too. The company makes a big thing of its one-size-does-not-fit-all belief, offering different sized chairs for the evolution of gamers… 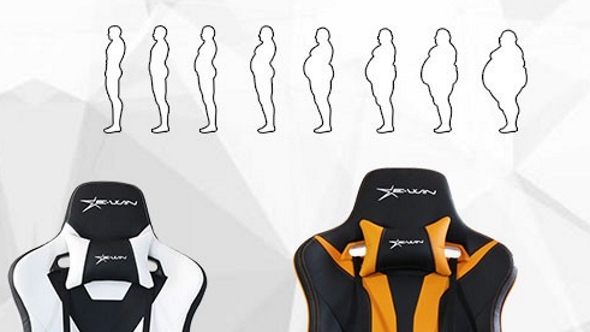 It’s not just for the corpulent among us either, as it’s also been designed for the taller folk after some gaming comfort too, adding a full 1cm onto the height of the backrest.

Okay, the minimal extra height is maybe of dubious benefit, but as someone who has a knee-busting habit of sitting cross-legged on my chair that extra width really does make a difference. It might only be 5cm, but it does add a certain sense of business class luxury to my gaming setup.

And thankfully it’s a doddle to set up. In fact EWin thinks it’s so easy that it bundles each chair with a pair of white gloves.

Once you’ve quickly put your chair together, in record time, you can then get to grips with learning the finer points of mime artistry. It’s a nice touch. Just don’t bother wearing them while putting your chair together because they’re a right pain in the, eventually incredibly comfortable, posterior. 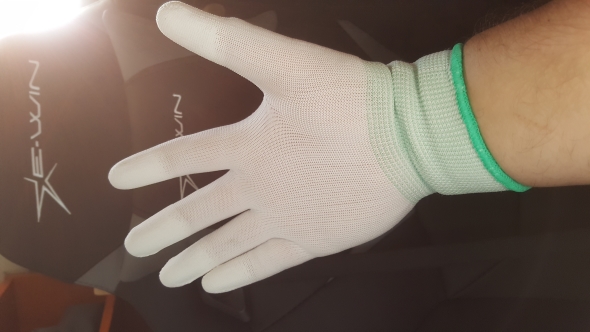 You might need some assistance putting the chair together, however, as holy hell is it heavy. You can really feel the chunky steel frame bolted together under that faux leather exterior. On the plus side there isn’t actually a great deal of assembly required, you only really have to connect the base to the back and then drop it all on top of the wheels.

And once it’s all together you’re good to go, adjusting everything to your personal tastes, from height, to tilt, to cushioning. I have to say that the neck pillow felt like a bit of a waste of time for me; it’s too low down on the back to support my head and doesn’t really allow for repositioning. I did jury rig it to fit around the top of the chair back, but couldn’t get it in any way comfortable. 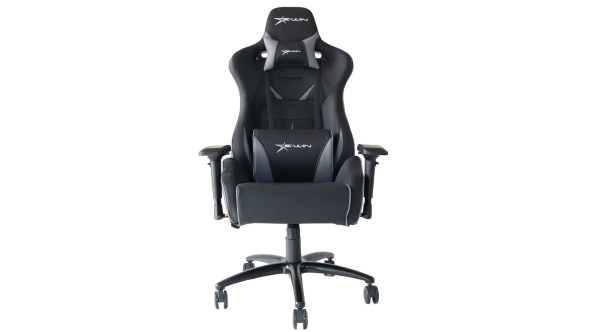 But I love me a lumbar pillow, however, and over a long Football Manager sesh – finally getting Bath City into the Football League #lifegoals – it really saved me from crippling spinal curvature. And even in the midst of the recent heatwave the PU leather never got overly toasty either, a testament to its breathable fabric.

The adjustment mechanism might seem a little simple, given the dual-arm method used by a lot of other high-end chairs, but the single, robust arm has given me no trouble. Something that can’t be said for the plastic handles on my Noblechairs Epic… the chewed up plastic controls are of almost no use now apart from to shift up and down.

But the EWin Flash XL doesn’t have it all its own way. As comfortable as the extra girth is it doesn’t feel as stable as my standard office gaming chair. The wheelbase is positioned incredibly far back on the seat of the chair, and while that means you can throw the seat back into recline mode without worrying you’re going to go flying, it means the same cannot be said for wheeling around.

Whenever I shift my chair about, to pull myself in closer to the desk for example, I come mighty close to overbalancing and tipping forward out of my seat.

And then we have to go back to the price. At almost $450 it is a lot of money to ask for a comfortable bottom, that’s the price of a really good graphics card. Now. I mean it was the price of a terrible graphics card back in the dark mining boom times, but they’re over now. Mostly.

But if you’re comfortable paying that much for a comfortable butt, then maybe you can find a way to justify the expense. The EWin Flash XL is very well built, robustly designed, and with only a few very minor niggles. It’s a bit of gaming luxury for your PC setup, though arguably it has to be the final piece of the puzzle, because there are far more important things to spend $450 on before you get around to making sure you’ve got a comfortable chair.