Everquest Next Landmark‘s desert is a little like a post-apocalyptic world in progress, littered with half-finished but deserted houses and castles of such scale and imposing beauty that great Ozymandias would regret wasting so much time erecting vast and trunkless legs of stone  to troll passing travellers. In most cases, they’re deserted while their creators go to mine more of the gold or whatever else they need to put the finishing touches on them, but that’s okay. While you can’t mine anyone else’s claim, for obvious reasons, you can visit all them and travel between servers to see what people have made now that they’re free of the tyranny of solid blocks and able to craft in slopes, spheres and other voxel goodness.

Here’s some of our favourites from around the assorted servers, mostly for doing something a bit different with the tools than simply putting up a house – though the houses people are building are already looking great, and come in just about every flavour you can imagine. 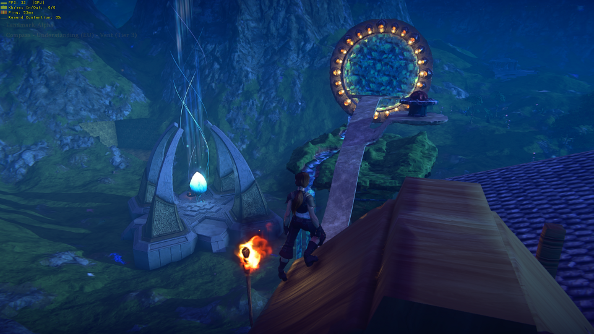 Located not far away from the local equivalent, here’s a great example of small-scale design well executed – a floating island with frozen water awaiting the ability to play with the real flowing kind, integrated (though sadly non-functional DHD), funky path to the torch-lit donut of destiny. In another world, you could well imagine stepping through it and finding yourself in a strange new world of beauty and wonder. Here though, the filling is hard rock, so you’d only break your nose. Stick with regular Spire travel instead. (Understanding/Vent) 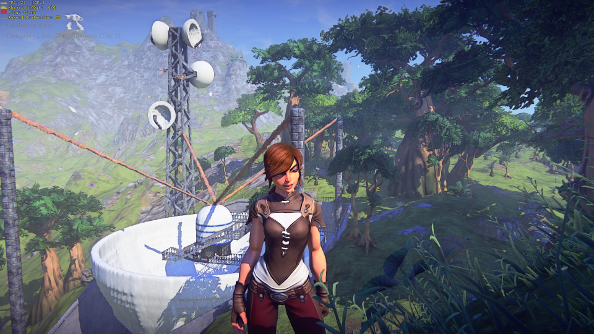 A while back it was discovered that the NSA had planted spies in World of Warcraft, which seemed a little unlikely. Surely they’d have done something about Garrosh’s plans for Pandaria if so. In Everquest Next though, there may be a few early signs of government/supervillainy, with what looks like a full nuclear silo underneath. If sleepy old Kerafym is back for Everquest Next proper, he’d better keep his head down. (Liberation/Shallows) 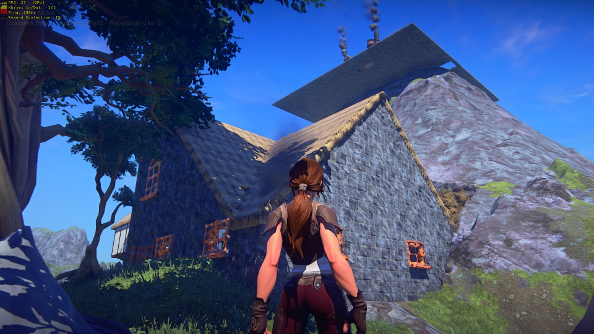 There’s no way to lock up your creations yet, but most people happily let you use their crafting stations and other things. Dreya merely has one request – don’t go into the basement. But why? What’s the that could- 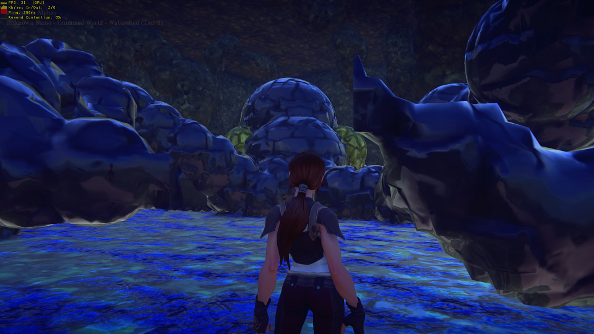 Right. Don’t go into the basement. Message received. Got it. (???/Watershed) That’s right, even fantasy worlds aren’t immune to the spread of capitalism. On the plus side, Landmark does seem to be surprisingly dick and boob free for a game that said to the internet “Come and build whatever you like!” But then, it’s early days, and early access isn’t cheap. Not too surprising that players have opted for more respectable erections, amongst them the giant statue that towers over it with no small sense of artistic smugness. But like the real world, there’s art and there’s Chicken McNuggets. Cravings must be met. (Satisfaction/Watershed) 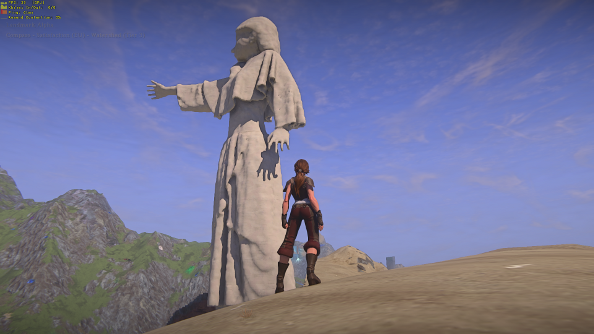 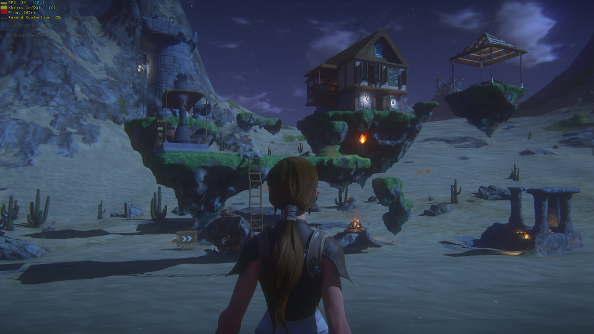 On the surface, this one is already pretty nifty – not least because it floats a few feet above it, accessible via a clever ladder hack that actually uses a series of slightly indented platforms to get you up and on top. But the cool part of this build is that it goes both ways, into a sprawling mine… as sprawling as a small claim allows, anyway… where you’ll find the Everquest Next equivalent of Majestic 12 squeezing Norrath in its claw, and this former inhabitant. Luckily, he’s dead and there’s no sign of Marcelline having written her name on anything, so Coldnyte should be fine. 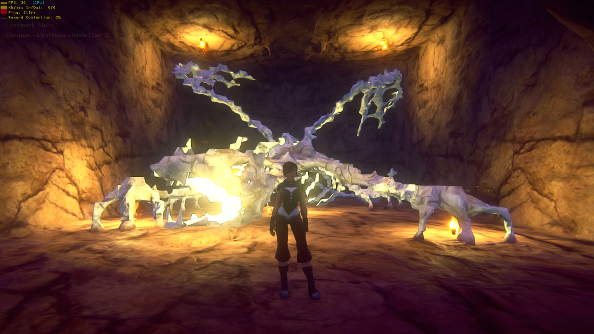 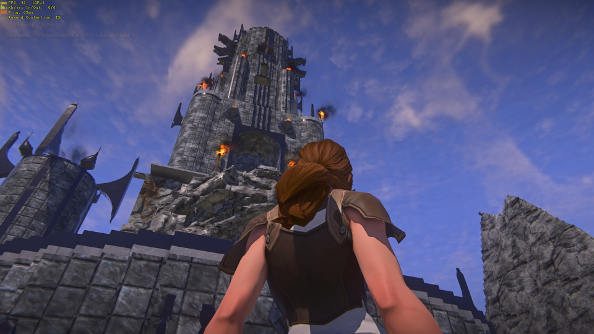 Two claims, one on top of the other, are needed to create this fine recreation of Sauron’s imposing fortress and the eye which lets him see. Just a few minor problems. Even with the best graphics card in the world, he’s not going to see much thanks to Landmark’s limited viewing distance. Second, he’s chosen to placed it in a world called ‘Knob’. This would have made for a much stranger movie, especially when Frodo declared “I will take the ring to Knob.” He’ll need a lot of vaseline, or that will really chafe. (Understanding/Knob) 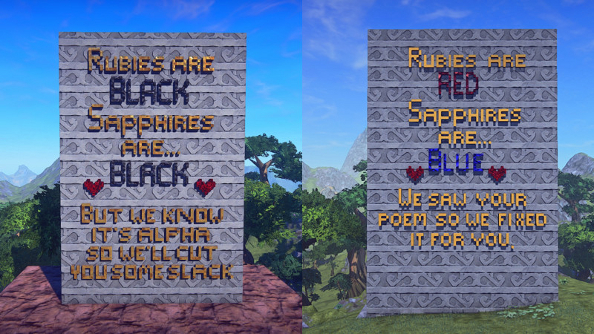 Pardon the borrowed image from the EQNL forums, but this deserves a prize for style and effort on both sides. A player uses the tools to wittily register a romantic problem with the game for this year’s Valentine’s Day, and the developers respond properly. Certainly beats the usual trade of e-mails or a quick comment about waiting for closed beta, doesn’t it? Though for Sony’s sake, we hope this doesn’t become the new way of communicating. True, it adds a certain Moses element to it, but just wait until the terms and conditions of the game need updating. The lawyers will be poking and prodding at microvoxels for hours… 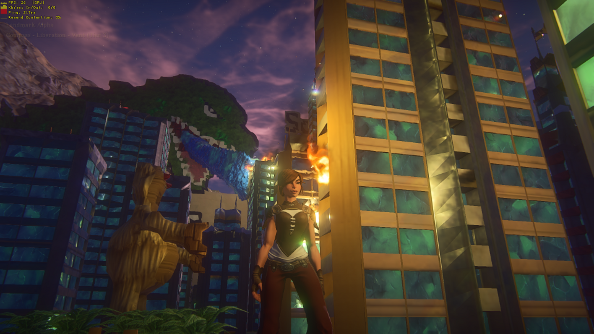 What do you mean there’s no monsters in Everquest Next Landmark yet? Look! It’s a whole city, that probably shouldn’t be there, being crushed by a monster that may be a 2D cut-out shooting painted on death-breath, but at least looks more realistic than about 70% of all Godzilla movies. You can storm around past the skyscrapers and imagine a day when real foes will be there to join you, or maybe a future in Everquest Next proper where everything will be as destructible as it looks like it should be. Grargh! Trailblazer smash! (Liberation/Vent) 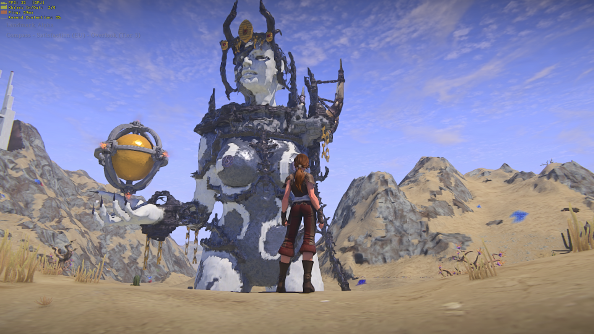 Good lord! So much for the ‘boob free’ thing. This titanic demon with the emphasis firmly on the first syllable is so complex that she takes a while for all her voxels to pop into existence… so maybe she’s actually wearing a bra and cardigan but it just hasn’t loaded yet. Get up close though and she’s an imposing figure, with flames bursting out of her magic ball and the kind of ass crack you could take a pickaxe to and have a good chance of striking tourmaline. Still a surprising lack of dicks though. But they must be out there. Somewhere. (Satisfaction/Overlook)

Have you seen anything cool while exploring Everquest Next Landmark? To see some of the best builds without having to physically run around the map, the Alpha Forums have a weekly screenshot collection where everyone is welcome to post their creations. You’ll find it stuck at the top, here, with links to past weeks at the start. Be aware though that builds can appear and disappear, and not everyone remembers to post where to find them. There’s a lot of islands now to search through if they don’t…