The Fable teaser shown at the recent Xbox Games Showcase hardly gives much away. We see a fairy-guzzling toad, a magical forest, and a sun-drenched shot of what must be Bowerstone, longtime hub of the major Fable games. We hear about “legendary heroes, treacherous villains, fantastical creatures, and wondrous places where nature and magic live in perfect harmony” – but there’s no gameplay, and no really meaty morsels of information. And yet the teaser still offers a few meaningful clues – and they hint at only good things to come.

Traitor as it might make me to my home platform, I hold the 2008 Xbox exclusive Fable II as the epitome of all that’s to love about the Fable series. In its bizarre and quintessentially British humour, tight hack-and-slash combat, high fantasy setting, Renaissance-era environments, quirky character customisation, and, of course, the achingly adorable canine companion, it delivered the version of the series that resonated most strongly with many fans. Excitingly, the trailer hints that developer Playground is taking us back to this Fable.

The first clue is in the name. It’s not Fable IV, as many might have predicted – it’s simply ‘Fable’. This is the final flourish of a clip in which we see none of the steampunk, smog-engulfed, Industrial Revolution-era setting of Fable III, the last major entry in the series.

It’s all nature and vibrancy. There’s a fairy fluttering about and a dense forest peppered with giant, glowing mushrooms, for goodness’ sake. In the distance, Bowerstone is a sprawl, but one comprised of the higgledy-piggledy rooftops and hamlets that define it in the pre-industrial days of Fable II.

Fable III was excellent in many ways, but it strayed substantially from the ‘Fable formula’, if you will. Where Fable and Fable II bask in nature, magic, and a world on the precipice of discovery – though still preoccupied with superstition, ritual, and blunderbuss-wielding highwaymen – Fable III is dominated by industry, hardship, and an overbearing monarch. I enjoyed it, but it wasn’t Fable to me. The teaser seems to suggest a winding back of the clock on this, and, stripped of the sequel implications of ‘Fable IV’, a return to the series’ wonderful, hobbe-infested roots – a reboot, rather than a continuation.

A return to the series' wonderful, hobbe-infested roots - a reboot, rather than a continuation.

There are some more subtle, yet more direct visual clues, such as the Heroes’ Guild seal appearing on the hilt of the moss-coated sword poking out of the forest floor. What this actually means is less easy to infer. It could just be a hint to fans that, yes, this is a Fable announcement early in the clip, given the symbol appears throughout the series. It’s most often associated with the Guild seals carried by each of the games’ heroes, which can be used to fast travel and communicate with the Guild master in Fable (remember “Hero, your will energy is low?” Shudder), and then the blind seeress Theresa in Fables II and III. 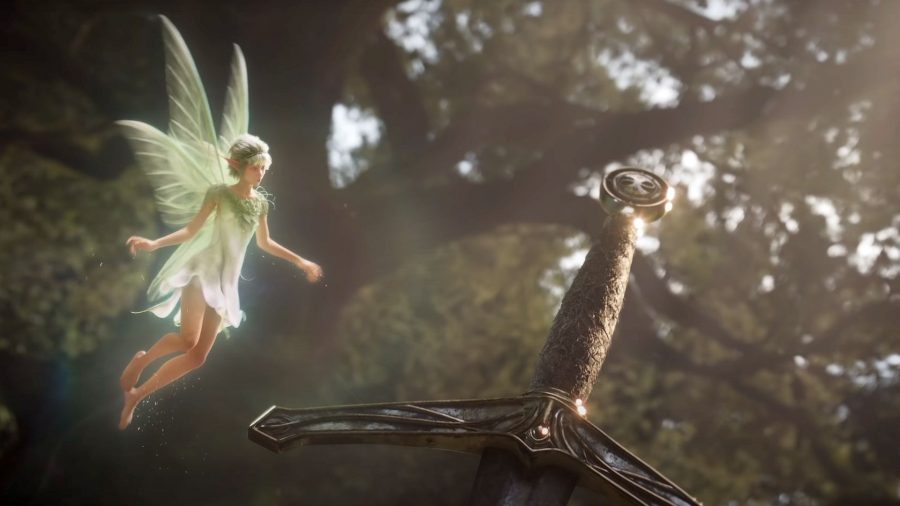 It’s an emblem at once associated with the Fable IP, but could equally signal the reappearance of the Guild or old ways of Albion in the game. Given the Guild was dismantled in the five centuries that bridge Fable and Fable II, this would certainly place the game much further back in Albion’s timeline than Fable III. Combined with the clip’s reference to stories and “legendary heroes”, plural, and with a cheeky dash of conjecture, perhaps it hints at a return to an age where many heroes roam Albion’s forests and towns, à la the original Fable, and to some extent, Fable II. This is a leap, admittedly, but it’s an exciting prospect. It would sure take the pressure off you from being the chosen one, that’s for sure.

Perhaps crucial (and easily overlooked) is this line in the teaser: “Not all stories have happy endings, but yours has yet to be written”. Not only does this evoke the signature, nostalgia-inducing opening line of Fable II – “and so, our story begins” – it’s suggestive of an emphasis on forging your own path through the game, which is as it should be in an RPG.

In Fable and Fable II in particular, The Hero of Oakvale and Hero of Bowerstone are given a story blueprint, pushed out of the nest, and then much of the rest is up to you. They don’t even speak (unless you count burps and ‘ta-daa’s as the end of particularly successful cossack dances), leaving you room to imprint your interpretation of their character. While it’s far from certain from the teaser that Playground is really sticking to this premise, it sounds promising for those who fondly remember trying to max out purity and morality sliders in all kinds of weird and wonderful ways.

One crucial question remains: will there be a dog? We need a dog

One thing present in all of the major Fable titles, and which looks to make a bounding return in the next, is the humour. That much is clear when the carefree, frolicking fairy becomes a big warty toad’s afternoon snack. Think back to Fable II’s opening cinematic, in which an exquisite little sparrow darts across snow-swept hills and cobbled streets, only to then deposit its own previous meal onto the head of our hero. It looks like we can expect that same energy to continue in the next Fable.

So yes, it’s sparse, but the teaser offers plenty of fodder for Fable fans to chew over for the time being, which I’m choosing to take as signs that Playground is preparing to return the series to its wholesome, chicken chasing roots. However, one crucial question remains that we’ll need an answer to, pronto: will there be a dog? We need a dog.