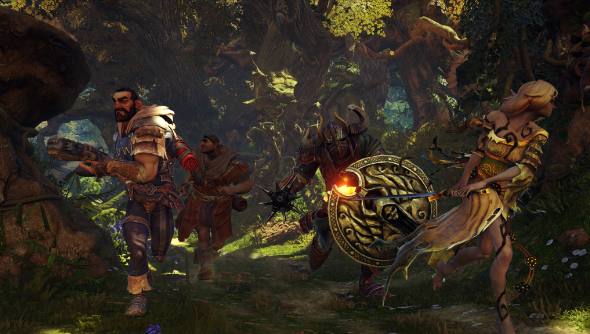 Lionhead’s next game in its iconically British fantasy series Fable will be free to play.

Fable Legends is a multiplayer game in a similar vein to Evolve and BioWare’s cancelled Shadow Realms, where four players team up to battle through an area where the villains are controlled by a fifth player. Players can be from PC or Xbox One communities thanks to cross-platform support.

The first story quests will be completely free to play. In future new quests will be released in an episodic nature, which will be paid-for content. Heroes and Villains will be offered on a MOBA-like rotation system, swapping out every two weeks. Any level progress you put into characters will be preserved, so you can wait for them to be unavailable or purchase them in-game.

An in-world currency can be earned through play, or actual real-world cash can be used in the store. Aside from heroes, cosmetic items can also be bought in the store. Anything that relates to the game, such as weapons, can only be earned by playing the game.

Talking about the controversial world of free-to-play, creative director David Eckleberry said: “The right version of F2P is a very good thing for the world. The wrong version is kind of an abomination, but if you’re very fair to your players and they can play as much as they want, then it seems right.”

Lionheart look to be planning a long beta phase to ensure Fable Legends works well, invoking even more similarities between its systems and that of a MOBA. They’ll need the testing time, too: Fable Legends is a cross-platform game, meaning you can play alongside players who are gaming on a Xbox One.