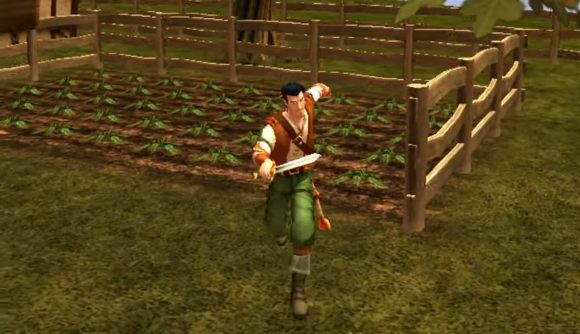 Fable, like pretty much every game Peter Molyneux was attached to, was wildly ambitious, and plenty of the features discussed pre-release didn’t make the final game. But Fable itself was already a vastly different game than the one the developers initially envisioned, and the idea of real-time tree growth doesn’t sound nearly as ambitious as what was planned for Wishworld. With a Fable 4 announcement increasingly likely, let’s look at what might have been.

Wishworld was the name of the game originally in development at Lionhead, and it looks a lot like Fable at first glance. But this was set to be a magical combat game where you’d shape the world around you to suit your purposes in the sands of the titular Wishworlds. If your character had an aquatic bent, you could make oceans, fill them with mermen, then turn one of those mermen to giant size and ride him into battle.

Your abilities to shape the world work for defence as well as attack. You could shape the land around your base – or rather, your heart – and your summoned creatures could be set to duties like guarding and exploration.

All this comes courtesy of Chris Bratt in the latest episode of People Make Games, and in speaking with some of the original developers, he was even able to capture some gameplay footage of an early build – though that footage mostly consists of an unremarkable town to run around in.

Check out the full video for plenty of detail.

There are also some original design documents to look at.

Here's a few pages from the original design doc too! It sounds wild. pic.twitter.com/syVqk4dmQC

It’s unclear exactly how much of Wishworld’s ambitious feature set had been implemented before it was reworked, but the pitch never landed with publishers. Instead, Lionhead went toward something a more like a character-oriented RPG, and thus Fable was eventually born.

{"schema":{"page":{"content":{"headline":"Fable was originally a magic combat game that let you shape entire oceans and volcanoes","type":"news","category":"fable-anniversary"},"user":{"loginstatus":false},"game":{"publisher":"Microsoft","genre":"RPG","title":"Fable Anniversary","genres":["RPG"]}}}}