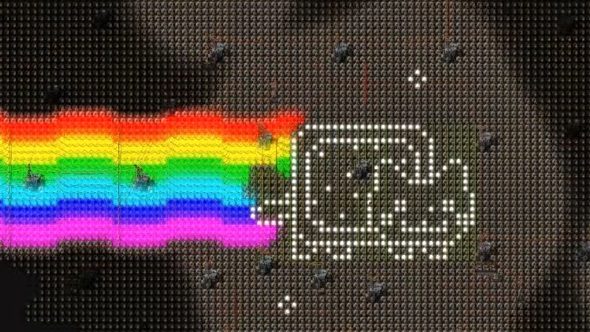 It’s only been six days since the release of Factorio’s 0.15 update and its player base is already busy making automated meme machines. While the update added in features like nuclear power, new tutorials and an overhaul of the game’s research system, the most popular addition in this update has been the new programmable speaker item.

If you’re a keen builder, check out this list of the PC’s best sandbox games.

Designed primarily for alerting factory builders to a possible break in their production line, players have gone to town creating bespoke jukeboxes to play specific songs. Combine this with the ability to create simple visual displays, and Factorio players have started to create their own music videos in-game. YouTuber Tritex989 has lead the charge with these musical machines, creating a cover of Portal’s Still Alive in less than a day of the update going live.

This was then followed by a cover of the Type A theme from Tetris, complete with a visual display of someone playing Tetris.

Along with a version of Nyan Cat (seen above), Tritex989’s latest build was covering the song “How Far I’ll Go” from Moana, complete with a glowing piano which lights up to show the notes being played. To get a contraption like that built in just six days is astounding.

Don’t worry, YouTuber hungyG has done the necessary task of creating a cover of Smash Mouth’s All-Star using the programmable speakers. With someone having previously built a visual display that shows the music video to Darude’s Sandstorm, expect a faithful recreation of the infamous Finnish trance song sometime soon.

If these musical contraptions have peaked your interest, Factorio is available on Steam for $20/£15.