There’s little company in the frozen wastes of Fade to Silence. The world as we know it has been lost to an eternal winter, and a harsh landscape of ice and snow now smothers the Earth. The post-apocalypse is a lonely place. With most of the population dead, it’s difficult to find any survivors, let alone one who can lighten the mood with a casual chit-chat.

And so developer Black Forest Games has been kind enough to provide a conversationalist to fill the long winter silences. As you scavenge in the deadly tundra, you’ll be joined by a floating Eldritch monster who is happy to exchange a few words. But don’t be too relieved. Instead of helping you in these desperate times, this godlike entity mocks and berates you – not exactly the best company if you’re after a morale boost.

“It’s the essence of evil,” Hans-Jörg Knabel, head of story at Black Forest, says. “It’s attempting to destroy the entire world by taking it over with corruption. It tries to turn every being to its side, taking over the bodies of the living and the dead, as well as nature itself. It tries to create its own ideal world, and views its corruption as beautiful, almost divine.”

You are Ash, a survivor of the apocalypse who, besides entertaining the essence of evil, is tasked with building a refuge. You need to scavenge for resources, craft items, and navigate the surrounding landscape even as it swarms with other corrupted, tentacled monsters. 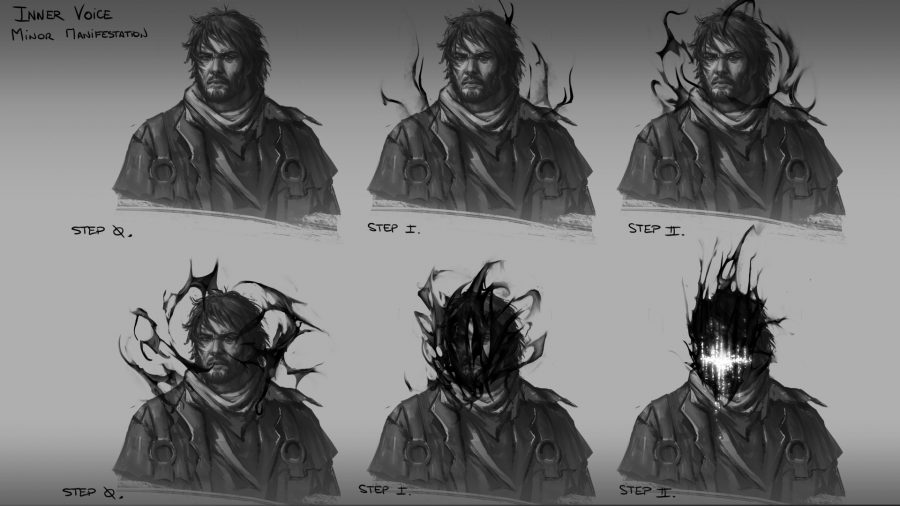 However, the creature that follows you around is not like the others. Black Forest has named this demon the Inner Voice, a ghostly entity who is always ready to chat, whether you like it or not. It questions your skill, quietly discourages you from certain tasks, and goads you into conflict. “The Inner Voice is quiet, insidious,” Knabel says. “Its suggestions at first sound almost reasonable, and even kind. There’s always something that’s not quite right, though, something awful that breaks through when Ash displeases him.

While never loud, it’s scornful and angry when things don’t go its way

“It attempts to appeal to Ash’s lesser nature, but when he does give in – by running away, or abandoning a mission – the Inner Voice immediately mocks him. While never loud, it’s scornful and angry when things don’t go its way. It is, by turns, like a petulant child, an emotionally abusive partner, or a displeased overlord.”

The Inner Voice is reminiscent of other ever-present characters in games, like Atlas’s dubious instructions over BioShock’s fuzzy radio, or GLaDOS’s relentless sassy commentary in Portal. These characters are a vital part of your journey even if, to them, you are only a small part of a wider plan.

It’s a powerful dynamic between two characters, and, in the best games, a personal relationship can form, especially if that other voice has been with you since the very beginning. “The game starts with him floating over you,” says product manager Mischa Strecker. “He says he’s not finished with you yet. You wake up and you start the game in a completely ruined camp, and everything’s burning.”

The landscape is full of Eldritch creatures which are a gross mix of teeth and tentacles. They gather in nests which you must eradicate, and only when the threat is gone can you scavenge and loot to your frozen heart’s content. And you can always rely on your ghostly BFF to give his opinion as you explore.

“It comments on the situation you are in,” Strecker says. “Like, when a blizzard is coming it says, ‘Only the weak seek shelter. The tough ones press on.’ It always tries to get you into dangerous situations. It’s your decision if you trust it or not. Sometimes it gives good advice, sometimes it has really bad advice, but most of the time it just mocks you.” 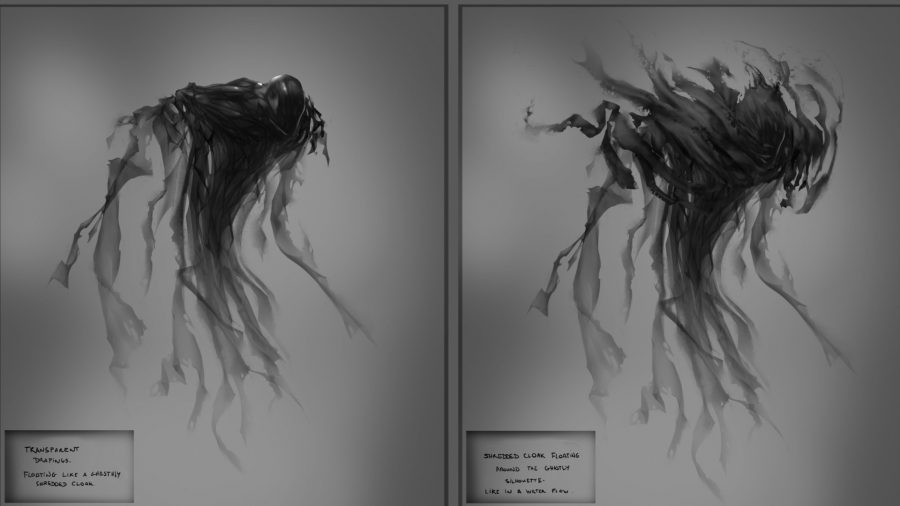 Black Forest had a particular design in mind to make the Inner Voice stand out among the other freaky tentacle-things roaming the winterscape. The team first envisioned it overshadowing Ash’s face when it spoke, but then decided to have the creature manifest as a ghostly apparition.

“Visually speaking, the Inner Voice had to convey an intrusive and dark evil appearing and disappearing like a ghost,” creative director Jean-Marc Haessig says. “As the creature interacts with Ash only by speaking to him, we intentionally removed its arms and legs, keeping only a vague body made of floating pieces of a dark cloak that dissolve like a dark fire or ashes. Whenever it appears during the story, it floats around Ash very closely, in wicked dancing motion. We wanted it to feel insidious, harassing and manipulating Ash’s mind.”

The Inner Voice’s commentary includes both sassy remarks and snarky quips, but there are moments when a comment can cut a little too deep: “Just walk away and die. You don’t need company for that.” It slowly chips away at your morale, always urging you to give up and lose hope – a constant reminder that when trying to survive in the apocalypse, death is always with you.

Some advice: Check out the best survival games on PC

When the silence is deafening, it’s difficult to ignore the loudest voice. The Inner Voice is an effective antagonist because it’s part of Ash. And just like Atlas, Andrew Ryan, or GLaDOS, it’s the ones who know you best that can hurt you the most.