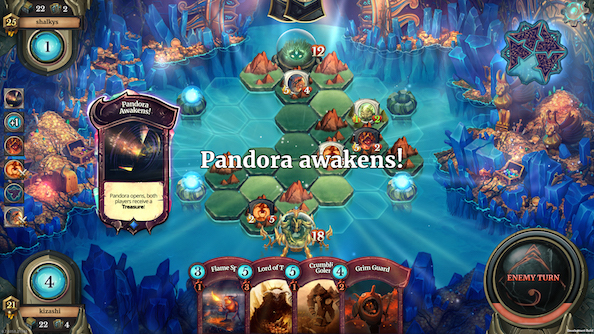 Faeria’s only been out of Early Access for a week now, but already pre-orders for its first expansion The Adventure Pouch are live. It’s the first of a long road for content updates promised by Abrakam to keep Faeria fresh and interesting now it’s out in the wild, and is due out for release early this summer. Here’s what it’s adding: a new co-op campaign, time limited co-op boss battles, new cosmetics and daily challenges aplenty.

Want to know what we thought of this F2P CCG? Check out our Faeria gameplay impressions.

Abrakam are offering a discount for all pre-orders running all the way up until 9 May 2017, which we’re assuming is when the expansions will be launched. Alongside the discount, players who pre-order The Adventure Pouch will also get instant access to six new cards and an exclusive card back.

Aside from pre-ordering, players will also benefit from stockpiling gold during the months preceding The Adventure Pouch’s launch as they’ll be able to unlock an additional series of cards that are coming to the expansion for free with it. This is only possible during the pre-order period, making these as yet under wraps quite collectible. What’s more, The Adventure Pouch will only be available to purchase for a limited time once it’s released, and will be the first of many ‘collectible expansions’ coming to Faeria in the future.

“We have such an amazing community, we couldn’t have made the game without them and seeing such growth right after launch has been amazing,” said Abrakam’s Emilien Eloy of the upcoming expansion. “This Adventure Pouch pre-ordering campaign is a way for us to demonstrate just how committed we are to supporting the community over the coming years, as well as a way to reward early-adopters with these awesome perks.”

You can pre-order The Adventure Pouch here, if any of that sounds like your cup of the proverbial.