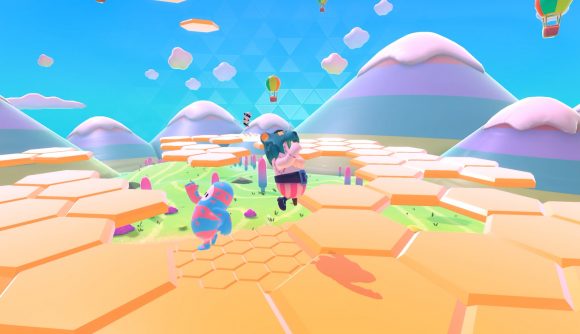 After the first beta was a huge success, Fall Guys is running a second one this weekend, and players are starting to get creative about how they tackle the colourful battle royale game‘s obstacles. One person has taken the rainbow aesthetic to heart, and decided to compete using a controller made out of jelly beans.

The contraption comes from Dylan ‘Rudeism’ Beck, a Twitch streamer that specialises in making bizarre controllers. In this instance, he’s wired a bunch of jelly beans to a circuit board, and each bean represents a different movement or action. The beans are touch sensitive, so playing is somewhat like using a touchscreen keyboard, except squishier.

A video demonstration from Beck’s Twitch stream was shared by the Fall Guys Twitter account, showing him tackling a stage where you’ve to avoid the gaps on a rotating platform. He’s determined to get a win on the multiplayer game using the deliciously sugary joypad, and you can keep an eye on his stream to find out if he makes it. Judging by his performance in the clip, that might not be too unrealistic a possibility. Late last year, he went viral by playing Untitled Goose Game using controls that meant he had to act like a goose.

Beck isn’t the only one in the make-your-own-controller field. Others have gotten even more risque, beating Sekiro: Shadows Die Twice using the Donkey Kong bongos, and Dark Souls 3 using bananas. The conclusion here is that Beck needs to use his jelly beans on BloodBorne, or at the very least, the 16-bit version.

THE MAD LAD DID IT