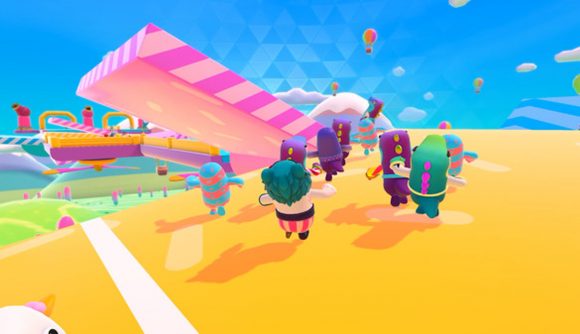 After a busy launch month, Fall Guys is getting a major patch next week that will bring a selection of tweaks to the battle royale game, as well as remedy some of the more common glitches and bugs.

Developer Mediatonic preemptively released the patch notes on Twitter, listing all the changes coming to the multiplayer game. To start, the algorithm will now only select team games if there’s an even number of players. A gameplay exploit in Jump Showdown will be stopped, and some of the surfaces in Slime Climb altered so players can’t grab them. Text is being changed in the in-game store to prevent accidental purchases, and some outfits are getting visual fixes.

Depending on your experience, the most exciting entry is likely that the top five most frequent crashes are being addressed. Being an online game that’s only been available to the public a few weeks, it’s an unfortunate reality that some unforeseen, major bugs can emerge, crashing the game for some players. From next week, there’ll be significantly less of the more common ones to worry about.

Trophies and achievements are being properly setup for all languages, and party members will be sorted first for spectator mode. Fall Guys got a Portal 2 P-Body skin yesterday, and the game’s currently in the middle of a brand bidding war to win a custom skin.

We’ve got a patch that’s almost ready to go – will hopefully drop it in the next week!

I’m really excited about this one as it’s got lots of the things you’ve been asking us for!

Shout yourself out in the replies if you spot something you requested!

The patch is expected to roll out within the next week. Season 2 of Fall Guys will be revealed at Gamescom.