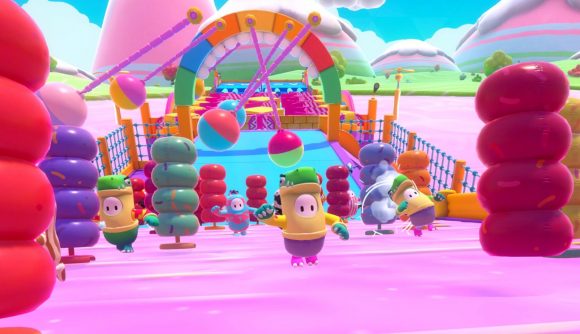 Fall Guys is one of the surprise hits of the year. The delightful bumble royale has sold over seven million units sold on Steam alone and is the most downloaded PlayStation Plus game ever. While it’s endearing to see a hit come out of nowhere, it does mean that Mediatonic has to consider new features that the developer didn’t think it would need.

Part of the new PC game’s success comes from having blown up on Twitch, which has led to an upcoming Twitch Rivals tournament. While games with esports ambitions typically offer custom lobbies or servers, Fall Guys doesn’t have that just yet as the scale of success it has had couldn’t really have been anticipated. In an interview with The Loadout reports, however, some form of private lobbies will be introduced when the developer figures out how it would make sense in the world it’s built.

“It’s still early days, but it’s something we hear a desire for,” game designer Joe Walsh says. “Fall Guys is ultimately a TV show, and people want to be the director, they want to run their own show. We totally hear the demand for that, but it’ll take us a little while to figure out what that looks like exactly. But it’s on our list of things to do.”

Community manager Oliver Hindle also reckons private lobbies will help others hold events, such as Twitch Rivals. Hindle explains that the team is also working on a set of guidelines so that other people can host events. “It’s not something we really expected to happen,” he says. “We used to make a lot of jokes on Twitter about Fall Guys becoming an esport, but it was more sarcasm. But yeah, it’s really cool to see this sort of thing emerging.”

You can check out the full interview over on The Loadout, where the Fall Guys team discuss memes, plans for the future, and whether or not publicly roasting Fall Guys flop Timthetatman was a stunt or something that came about organically.