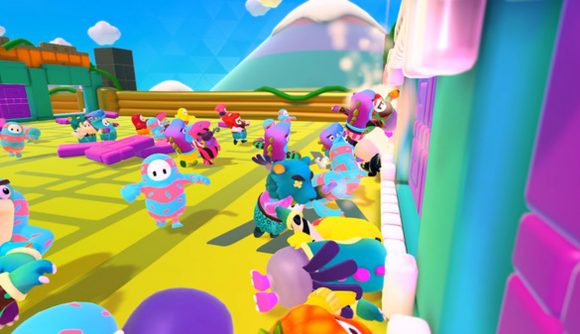 This weekend, rainbow-coloured quasi-battle royale game Fall Guys held its first public beta, and to call it a success would be an understatement. The 60-player party game from developer Mediatonic shot up the Twitch and Steam charts, briefly holding the top position on the former, while floating around the top ten in the latter.

The beta started on Friday, July 25, and ran though to Sunday, July 27, and from moment go it was clear demand was high. Streamers and content creators gave away codes consistently, and Mediatonic has struggled to keep up with the number of requests. As much is reflected in the stats, Fall Guys peaking at number six in the Steam top sellers list, and, for just a fleeting moment, getting all the way to number one on Twitch, beating out the likes of Fortnite, Grand Theft Auto V, and League of Legends.

It’s since fallen, sitting at 11 on the Steam charts, and 25 on Twitch, at time of initial writing. Everyone’s moving on since the beta ended Sunday evening, but that’s some impressive momentum for an indie game.

In typical fashion from publisher Devolver Digital, Fall Guys puts an anarchic spin on the many-players-one-survives formula of battle royale by making rounds a multi-level obstacle course that gradually whittles down competitors. The team went with 60 instead of 100 players per match because in this multiplayer game setting, 100 felt like overkill, and 30 stages will be available at launch.

For one GLORIOUS second we did it.

We were on top of the world.

We looked up and saw only people chatting. Just chatting, they were.

There was no other game above us.

It’s games… all the way down.

Games… all the way down. pic.twitter.com/1SUFgsWW7q

The beta was so resoundingly successful that Mediatonic has decided to run another one. A new round of keys will be going out ahead of the kickoff July 31, with exact times to be nailed down later. Here are the details:

Number of Retweets = Number of extra keys we email out

No need for any fear of missing out, though, since Fall Guys comes out in full on August 4 – you can find the Steam page here.