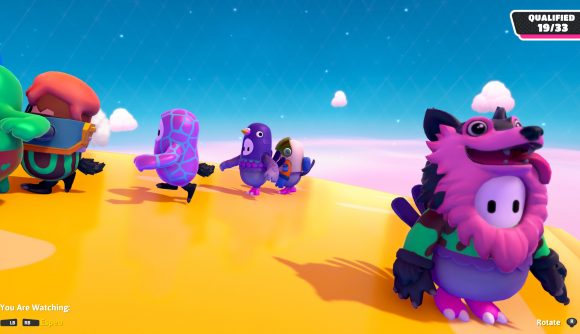 The Fall Guys have arrived, and it turns out they’re super popular. Medatonic’s lighthearted mashup of physical game shows and battle royale launched today on Steam and PlayStation 4, and has already hit 120,000 concurrent users across both platforms.

“Just spoke to my friends in the server team and we have at least 120k people connected to the game right now,” someone on the Mediatonic team tweeted on the official Fall Guys account shortly after launch. “We’re currently BEEFING up our servers to cope with all of the BEANS who want to fall.” According to SteamDB, Steam accounted for as many as 56,032 of those players.

Good news, certainly: Fall Guys is an elimination contest that begins with 60 players (rather than the traditional hundred), and a healthy player count means shorter queue times for matches. If our time with the beta taught us anything, it’s that getting knocked out of Fall Guys happens a lot – but you’ll generally want to rush right back in and try again.

Mediatonic cautioned that upgrading servers could mean occasional interruptions in game service, but that these wouldn’t last long.

There will be occasional interuptions for the next 30 mins

During its beta phases, Fall Guys proved to be a massive hit on Twitch, which has probably helped drive a lot of this launch day interest. People have already gotten creative with it – with one man wiring up a series of actual jelly beans to use as a Fall Guys controller.

There’s a case to be made that Fall Guys belongs on the list of the best battle royale games you can play right now, but we’ll have to see if it can build on its initial popularity. The plan is to add in additional stages as post-launch content. You can find it over on Steam, and you won’t be sorry you did.