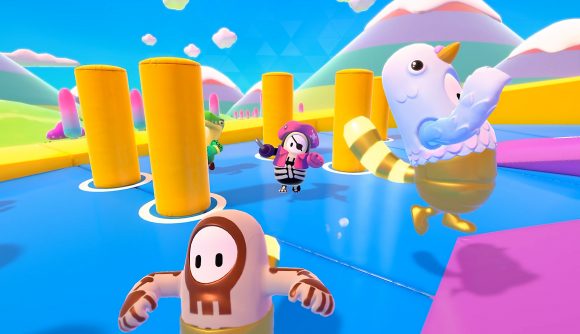 Fall Guys is the breakout hit of the summer, and with two million copies sold on Steam, it’s ready for its first update. The first Fall Guys patch adds a new level to the rotation, and fixes some weird physics problems that were occurring in certain rounds and making things even stranger and bouncier than intended.

The new level is a “fan favourite” from the Fall Guys beta called Jump Showdown. It’s a more demanding ‘spin’ on the existing Jump Club mode, in which you have to hop over a spinning arm that rotates at increasing speeds around a disk-shaped platform, where you and the rest of your jellybean buddies are all hanging out.

Jump Showdown is almost the same deal – there’s the disk, the rotating arm, and the upper, slower arm that can clothesline you if you don’t time your jump correctly. This time, however, the disk itself is made up of platforms that gradually get weaker and eventually plunge into the slime below, so you and the surviving Fall Guys have to scrunch together closer and closer as time goes on.

Fall Guys has opted to release the first update patch notes in tweet form, and here’s the start of the thread, which introduces Jump Showdown.

Jump Showdown – A fan-favourite from the beta! 👑

We'll be adding it in our first update TOMORROW!

More new levels will be coming soon – along with new features & costumes 👀 pic.twitter.com/zQ4hOI70MP

Here’s the rest of the patch notes, for those of you who (sensibly) can’t stand Twitter:

Our Fall Guys review is a delightful read for anyone who still hasn’t had a chance to try the game out or watch it on Twitch, where the battle royale game has also been doing crazy numbers since the beta.

Sadly, this patch doesn’t contain anything helpful if something has gone wrong with your jelly bean controller. If that’s what you’re using to play, you’re on your own.