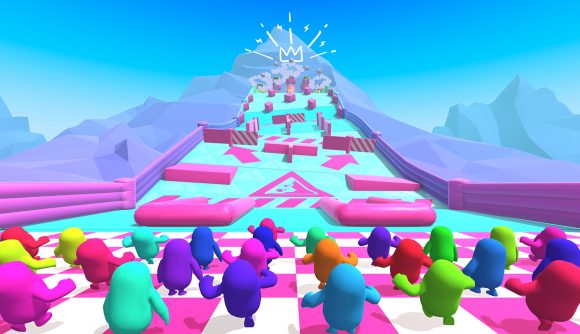 When you first hear about Fall Guys, chances are you’ll think it’s a battle royale – it starts with a huge mob of players, which are then winnowed down to a single winner. But here, winners and losers are determined through a series of slapstick game show-style rounds, and when Fall Guys ships this summer, it’ll have a total of 30 to draw from for each match.

Developer Mediatonic says it has plans to add more post-launch, too.

“Takeshi’s Castle is where we started, and we’re basically trying to make the most amazing knock-out game show the world’s ever seen,” says lead game designer Joe Walsh, speaking to us from the floor of PAX East in Boston. “You have 60 real people at the start line, and you’re going to go through Mario Party-style mini-games and eliminate 5-10 people every time, and we keep doing that until we have one winner at the end.”

Four of the ’rounds’ were available to play here at PAX. In the first, all 60 Fall Guys dashed toward a wall full of doors. Some of these would open, but others would not – the only way to determine which was which was by flinging your Fall Guy bodily into the door and hoping for the best.

A second mini-game, called Tail Tag, gives some Fall Guys a raccoon tail and plunks everyone down in a bounce house full of ramps and spinning traps. The goal here is to end the two-minute round with a tail, which can be grabbed off anyone who has one.

Walsh said Fall Guys will arrive this summer with 30 such rounds, and that Mediatonic will be adding more after launch. Fall Guys will feature seasons, and each season will bring with it new mini-games, variations on existing mini-games, special events, and crazy costumes and other cosmetics to earn.

The idea, Walsh says, is to give players the feeling of competition without making things too demanding in terms of skill. A certain amount of chaos is crucial to Fall Guys’ wacky appeal, and Mediatonic has drawn from shows like American Gladiators rather than the Olympics in designing the events.

There’s no specific Fall Guys release date yet, but Walsh says it’ll be out on PC and PlayStation 4 this summer.