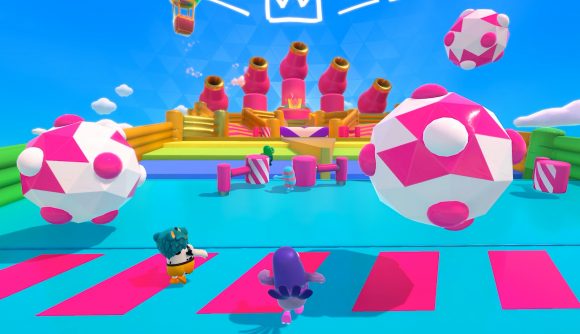 During a recent Devolver Direct, publisher Devolver Digital announced the release date for its colourful slapstick party game Fall Guys. Players can start bumbling about the various obstacles in the multiplayer game August 4.

The structure of Fall Guys basically mirrors TV game shows that involve contestants having to complete a particular set of challenges in a row, like Takeshi’s Castles, or Gladiators. You’re a costumed participant, of which there can be up-to-60, and you have to survive against all sorts of minigames, like balancing on giant seesaws, or climbing up a hill against falling objects, until you’re the last one left. It’s a quasi-battle royale game that favours tenacity rather than outright skill, making it perfect for a group where not everyone plays videogames.

Developer Mediatonic discussed why the cap is 60, rather than the usual 100, last year, saying that it was based on feedback where the crowded gameplay made it feel there was twice as many competing as there actually were. Some 30 levels will be included at launch, with more planned for the months thereafter.

Devolver put out a new trailer that samples the chaos, which you can watch below:

Given that there’s no conferences to attend in person this year, Devolver Digital decided to bring the show floors to us with Devolverland Expo. Fall Guys is due August 4, and you can find its Steam page here.