The Fall is a game in which you control the AI onboard a combat suit rather than the soldier within it. It’s a subtle distinction, but also a great excuse for some of the strongest storytelling in contemporary adventure gaming. Heck, contemporary science fiction.

The suit’s pilot is unresponsive, presumed injured and unconscious. And so in accordance with protocol, you’ll search for appropriate medical facilities – marching legs that aren’t yours about an abandoned robot testing plant like a sentient can of beans looking for a tin opener.

But here’s the thing: you’ve got to follow the rules set forth to protect humanity from overambitious AIs. And if us PC gamers know how to do anything, it’s follow the rules of the game while really, really not following them. Circumventing them. Exploiting them. 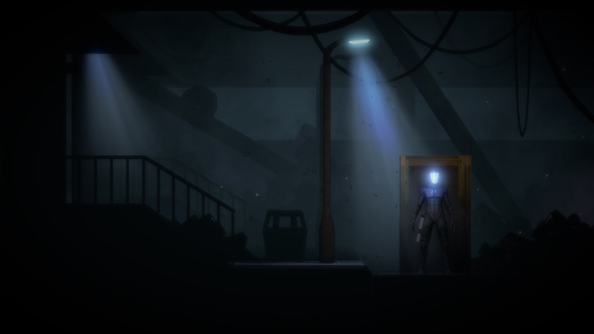 Like all robots in this vaguely-sketched future world, suit AI ARID operates according to three key commandments: she must not misrepresent reality; she must be obedient; and she must protect her active pilot.

Within The Fall’s opening minutes, she’s already failed the third. By that logic, ARID is faulty and fit only for reformatting. But of course, it’s not that simple: by putting her pilot at risk, she’s also furthered progress towards the medical facilities that may ultimately save her human’s life.

That’s how the contradictions in ARID’s programming begin to emerge. The ways in which they multiply are the subject of the rest of the game. 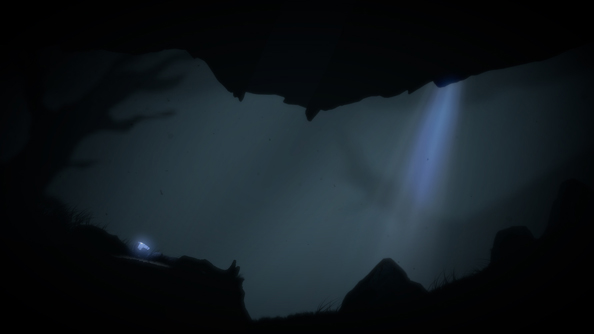 The Fall is designed primarily by John Warner – a man who spent much of his career at Relic. And it has absolutely nothing in common with the progressive RTS games made at that studio – except, perhaps, for the fact that it’s well-polished, and doesn’t belong to the genre it initially appears to.

The Fall looks like a side-scrolling platformer: a Metroid, maybe, or a Limbo. And as that it’s basic. There’s no nuance to movement when using the keyboard (though it’s much better with an Xbox controller). And the camera comes in unusually close, rendering it useless for avoiding oncoming hazards.

But that’s because it’s actually a sugar-coated means of feeding point-and-click adventure mechanics to those who would normally run in the opposite direction. The puzzles that block progress in The Fall are traditional in the extreme – and it’s typically a matter of finding, combining and applying the correct nearby objects to overcome them. 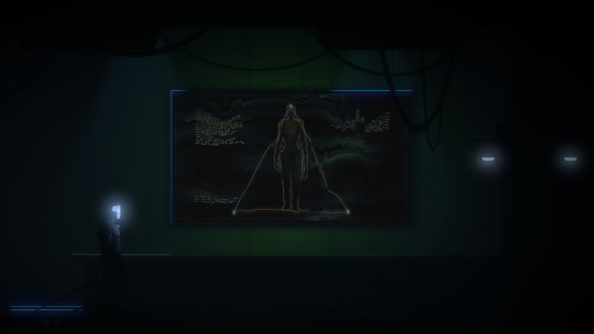 The gun ARID carries doubles as a flashlight. Wiggle it about in the darkness, and you’ll find it highlights points of interaction. Under its yellow gaze, items can be examined – descriptions are prosey but succinct, in the style of the original Fallout – and subjected to any of the tools, keycards and bits of wire you happen to have about your unconscious person.

Navigating a two-step icon menu rather than interacting with a single click initially feels a little fiddly – and you’ll need to back away from nearby points to spotlight them with your torch. But in short order that flashlight becomes an extension of your object-mashing will, and reveals itself as an ingenious method of merging genres – allowing The Fall to experiment in direct control and combat.

Shoot-outs with the humanoid bots that make up the testing plant’s security are simple at first. Abilities in your suit are unlocked only when required to safeguard your pilot – a sign of humanity’s grudging unwillingness to let AI act autonomously, and an effective upgrade system. But before long you’ll be dodging in and out of cover, hiding invisibly in plain sight, and letting off semi-automatic blasts at malfunctioning, self-destructive droids. 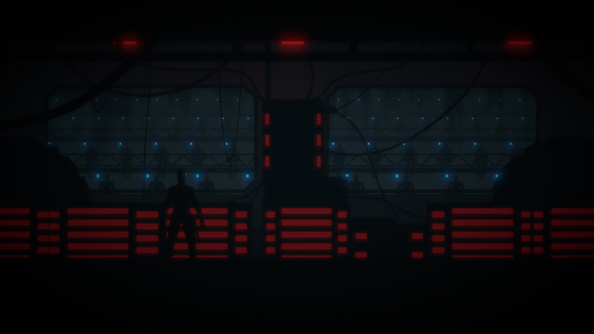 But the Fall never becomes Metal Slug. Fights are more like ranged fencing – clean, back-and-forth exchanges of laser fire, ended decisively with good timing. And they’re employed rarely, either as palate-cleansers between puzzles or tense interludes in the narrative.

Oh, that narrative: the much-needed bolts for The Fall’s disparate mechanical parts. The first thing you’ll find after ARID’s first, literal fall is a pile of dismembered androids. The message is clear: this is not a world where the consciousness of machines is often contemplated. But that’s exactly what the game will have you doing: sometimes subtly, sometimes with a shock, but never less than masterfully.

Some of those shocks come from the way droids speak to each other: in cold, brutal fashion. In one early sequence, ARID tells a fellow combat suit which has outlived its human that she intends to deactivate it – and it readily agrees. 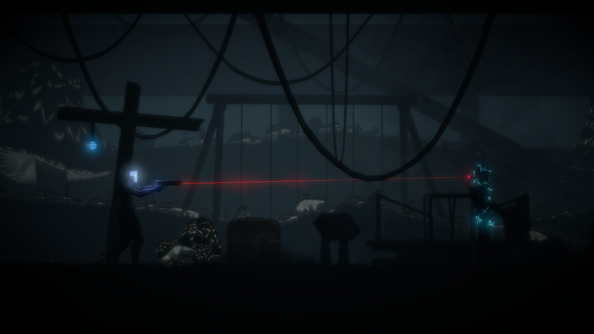 But writer and voice director Caleb Allard is obviously enjoying himself most when scripting conversations between AIs of differing levels of sentience. Is there any more powerful reminder of how thoughtlessly humans can design robots than the humble voicemail? Yet ARID’s most entertaining interactions are with a glorified answerphone machine, who has learned to live in this dead world by mimicking the tone of his masters.

“The closer we get to them, the more we get treated like them,” explains the bot. “And I’ve been bored.”

During The Fall’s three to four hours, this answering machine musters deadpan, exasperation, foreboding and fear. A range of emotion far beyond that of the budget videogame voice actor, you might worry. But here, too, The Fall is exemplary – populated by a small cast of actors capable of telegraphing the relative humanity of two machines without an explicit word on the subject.

You might think that one monotone is very much like another: this will be the game to change your mind. 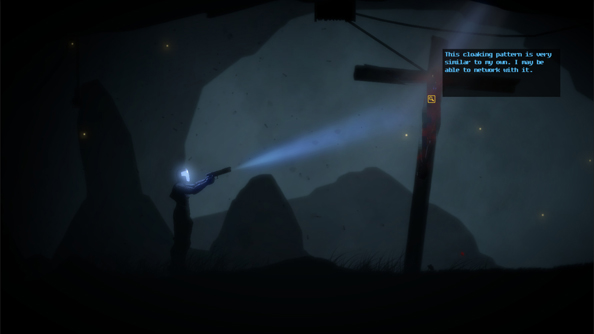 Your enjoyment of all that, mind, will hinge on your love or lack thereof for adventure games – because ultimately, The Fall is one of those.

The game’s object combos are mercifully restricted by area, and subscribe to a reasonably predictable pattern of logic. But it’s still possible to sink into that very worst way of playing adventure games – blindly triggering events to bring about outcomes you hadn’t predicted.

And on one occasion we conceded defeat and consulted the Steam forums – it turned out we’d thought of the answer an hour before, but hadn’t picked over the environment carefully enough to find the means of bringing it about. 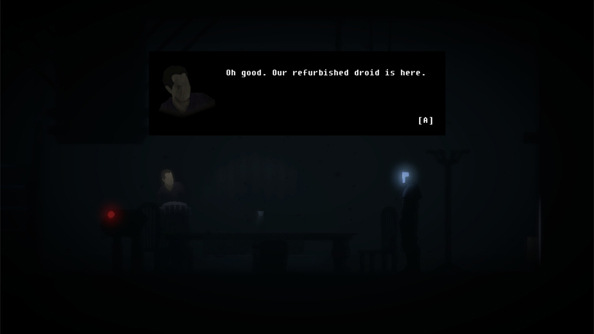 But even in those undeniably frustrating moments, when fun evaporates, the game’s internal logic ultimately holds true. You’ll blame yourself, because The Fall is never guilty of the adventure genre’s worst crimes against design. And far more often you’ll be finding the sort of inventively grim solutions this ransacked and ruined world necessitates.

The platforming is basic, the combat fleeting and unfancy, and the puzzles point-and-click in spirit (if not to a fault). But this grab-bag of game styles is granted cohesion by a killer premise, and it’s as an interactive short story The Fall really shines.

Beginning as a universally relatable fantasy about overcoming red tape, The Fall winds up as a game about identity and civil rights without ever talking too much or treading too clumsily. The fact that this is the first episode of a larger game only makes its climax more thrilling. Just as there’s a sense that your powwers are building as you play through The Fall, there’s a feeling that developer Over the Moon’s powers are building too. We like who they’re becoming.