Sorry, everyone. It’s all over. We had a good run there, but it looks like we’re going to have to draw a line under this whole PC thing. Apple CEO Tim Cook said so. Speaking to the Telegraph about the company’s newest range of devices, Cook remarked: “I think if you’re looking at a PC, why would you buy a PC anymore? No really, why would you buy one?”

It’s a compelling argument. But I venture the opinion that it isn’t completely watertight. There is, for example, this game: 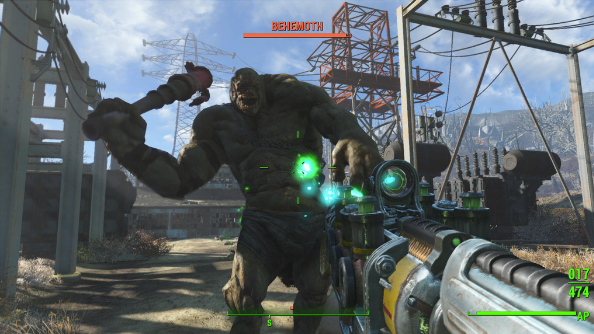 Fallout 4 is certainly one reason to buy a PC. It features a companion who’ll call you Mr Boobies, if you so desire.

There’s also the matter that 95.45% of Steam users are playing on a PC, while 3.49% are playing on Mac. That 95.45 percentile could probably offer up a few retorts to Cook’s question, if pushed. Such as:

– When something goes wrong with your PC, it’s often possible to fix the problem without having to visit a self-appointed ‘Genius’ in a glass-fronted high street shop who asserts a level of intimacy that suggests you’ve been on holiday together and occassionally puts a finger to his headset to sharply whisper, “I’m having an interaction right now, Claire”

– When your PC crashes, it’s at least honest about it. It knows better than to try placating you with a spinning wheel of cheerful colours. Its sad face emoji conveys genuine regret at having let you down

– When you look at an image on your PC, you’re not looking at it through a thin but distinguishable layer of thumb-grease

– As a major celebrity, your nude photots remained inaccessible to the world last year because you stored them on a PC

– I’m not sure if I’ve already mentioned this, but Fallout 4 is available on PC

Thanks to The Telegraph.