As the venerable Jack Johnson once sang – repeatedly, much to our chagrin – it’s always better when we’re together. No doubt Jack’s refrain is a direct reference to Fallout companions as, indeed, there is no combination of words that fit on the back of a postcard that better describe how we feel about these essential NPCs. After all, postcards are small, and our love for Fallout’s myriad followers, recruits, and Guns-For Hire is big enough to fill a fully-fledged listicle rather than a souvenir.

Looking forward to the next entry in the post-apocalyptic series? Here our pitches for potential Fallout 5 locations.

If only there was some way we could write such an article… Wait! There is! We put our heads together and scoured the wastes in search of the very best Fallout companions, from sharpshooter ghouls and super-sleuth synths, to masters of disguise and man’s best friend. Let’s go. 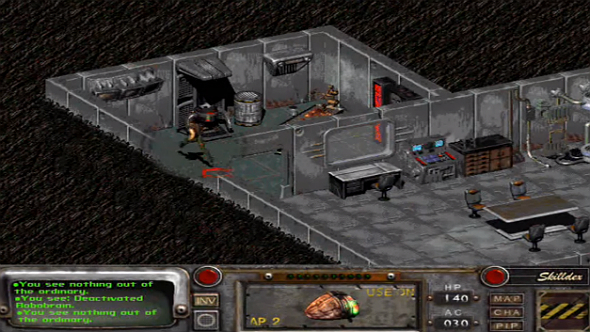 No, not the conscious hivemind computer with its sights on John Connor. But you are not far off. Skynet is only one of the weird and wonderful characters in Fallout 2’s wasteland menagerie, but allow me to reel off some of what makes Skynet the best of the bunch when it comes to having someone/thing by your side as you roam post-apocalyptic Oregon.

For starters, as Skynet is an AI, you have to build a body for it to transfer into. That’s pretty cool, but not as cool as the alien tech used to develop it. I mean, it becomes lethal when equipped with a “Big Frigger” power fist. It will frig you up. Then, once the events of Fallout 2 transpire, Skynet travels west in search of more data, and maybe even settles down with a mainframe. Even when the game is over Skynet invites you to imagine the possibilities…

Admittedly, Skynet does have some other quirks as a Fallout companion that make it less desirable. It occasionally makes it impossible to talk to NPCs because the arms of its robo-brain shell count as drawn weapons. It is also not able to heal during combat – unless you can get close enough to repair it. Even so, it is worth putting up with, as not only is Skynet arguably the silliest follower in the series, it is also a deadly ally. With thick steel plating, a range of weapons, and the highest HP of all recruitable NPCs in the game, there are plenty of reasons to make Skynet your buddy. 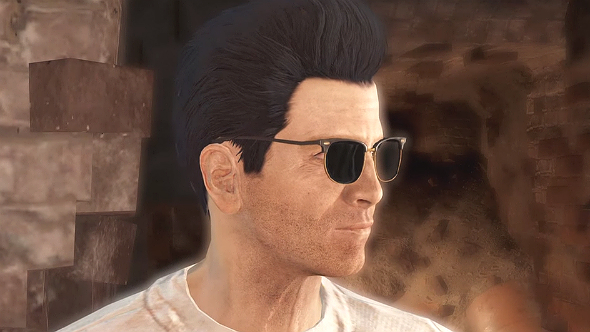 Knowledge is power. Fallout 4’s Deacon knows this. He is a companion that cloaks himself in a complex web of mistruths to protect himself and the Railroad faction, just as the Sole Survivor would with a Stealth Boy.

Speaking of, Deacon is the dream companion for stealth players as he gives you a +40% duration buff when you use Stealth Boys as part of his Cloak and Dagger perk – on top of a +20% damage increase to your stealth attacks.

Helpfully, and often hilariously, Deacon knows how to blend into his surroundings, too. As well as being tough for enemy AI to detect, his appearance adapts to his environment: step into a Vault, for instance, and prepare to see Deacon sporting a Vault jumpsuit.

If he is not your companion, you can also spot him across the Commonwealth – as long as you have a keen eye. Watch out for those trademark sunnies. 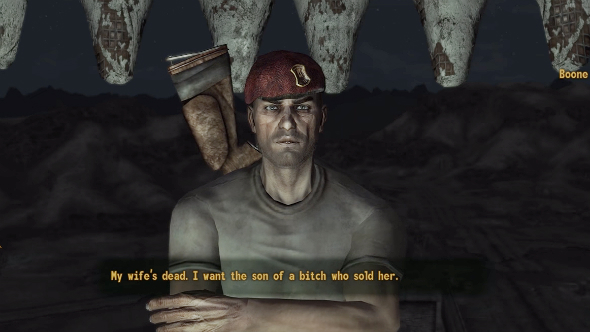 In my mind, Boone is the perfect RPG companion. He is steadfast, reliable and, most importantly, an incredible shot. Even better, however, is that he does not fill your game with inane chatter. Boone is a man of few words, preferring to let his gun do the talking.

That said, he is principled, and Boone’s hatred for Caesar’s Legion, and begrudging respect for the NCR, is a powerful storytelling technique, subtly guiding you towards certain narrative choices. He might not be the Mojave’s most dynamic companion, but he had a powerful impact on the way I played Fallout: New Vegas, and I missed him when the time finally came for us to part ways. 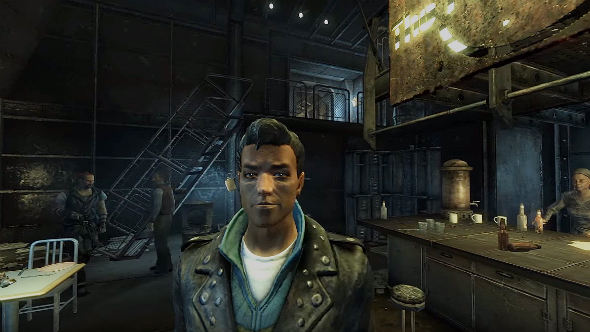 Toxic masculinity can survive anything, even the total annihilation of planet Earth, just like the common radroach. You first meet Butch ‘Tunnel Snakes’ DeLoria as an attendee of your tenth birthday party, where fisticuffs over a sweetroll hardly presage the flowering of a Wasteland-conquering fellowship. All Butch ever wanted to do is cut hair, but his insecurity over his alcoholic mother and lack of a father figure holds him back.

If you can stomach the sexual harassment and all-round unpleasantness divvied out by his Greaser gang and not leave DeLoria for dead in Vault 101, you can rescue him from idleness in Rivet City with some good ol’ fashioned adventuring. He is not much use in a scrap, but he will certainly keep your mud-caked bangs looking as sharp as his prized switchblade, Butch’s Toothpick. 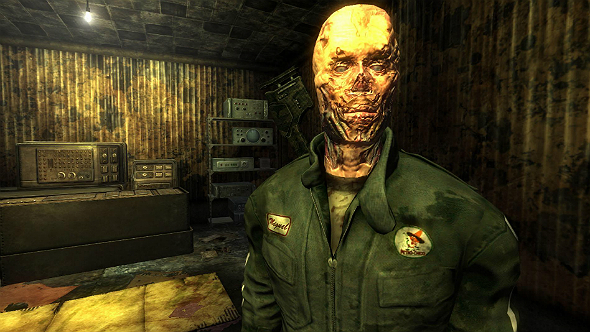 Fallout’s companions are all memorable in their own ways, but Raul is special. For a start, his name is Raul. That makes him Raul the ghoul, which, if you hadn’t noticed, is a rhyme. And that is only the start of what makes bringing this radioactive near-corpse along for your journey.

Rather than talk with the raspy, nuclear-torched tones of almost every other ghoul in Fallout, Raul speaks with the voice of Danny Trejo. Like Danny Trejo, Raul has a moustache, but unlike Danny Trejo’s, this one grows out of a strip of melted, deformed flesh. His half-destroyed teeth are in constant danger of rotting completely due to his addiction to sweet things (enamel forbid you put a bottle of Sunset Sarsaparilla in his inventory), and his special outfit is a Vaquero fancy dress, complete with hat and bullet bandoliers.

Behind all of Raul’s absurdity, though, is a tragic and heartbreaking past. Mercifully spared from nuclear annihilation, his family’s attempt to shelter refugees was met with violence and flame, and only he and his sister survived. That Vaquero suit? Bought purely to entertain his sister and distract her from the depression the apocalypse has brought on. And that is Fallout down to a tee, really; laughter even in misery. 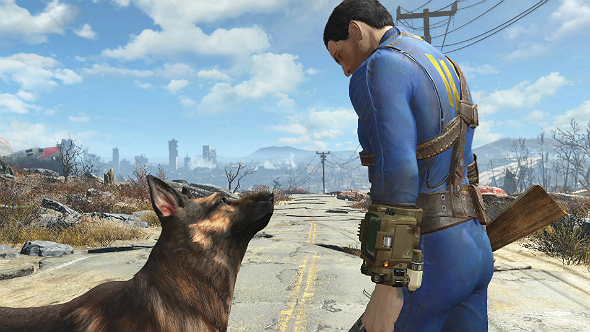 I don’t like dogs. Dogs, after all, are dicks. On top of this they smell bad, they drool, and their very existence betrays the skewed morality of all the people who are more upset when a mutt dies in a film than they are when a person does. Dogs, eh? Who’d have ‘em? But shorn of their questionable fragrance, and restricted to very specific AI routines, they can be bearable. Dogmeat – the canine chum who first turned up in the original Fallout, but also makes himself useful in 4 – is a case in point.

Powerful, useful, perhaps even endearing, this item-finding, body-searching hairball makes scouring the wasteland considerably less troublesome. The only problem with him is that he is not great at fast travelling. I discovered this too late, and despite rapidly returning to the same spot to collect him, was unable to find him ever again. Just thinking about it now elicits that same odd feeling I couldn’t pinpoint at the time. And what is this moisture in my eyes …? 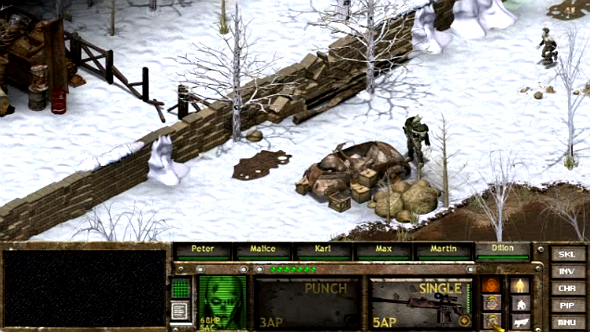 Fallout: Tactics does not have companions, but it does have recruits, and while they are not particularly great company, they are damn fine soldiers. Arguably, the best of the bunch is Dillon, a one-eyed ghoul sharpshooter – yes, I know that canonically the Brotherhood of Steel doesn’t accept ghouls into their ranks, but I’ll will forgive them for letting Dillon in.

This ghoul joins your ranks with maxed out Perception, so all you have to do is equip him with a sniper rifle and enough 7.62mm rounds for every enemy in the level, and you are set. The 76-year-old mass of rotting flesh does come with a hefty drawback, though – he can irradiate your whole squad if you let him travel alongside them in the Hummer. Having to actively treat Dillon like an outcast or risk the health of your whole squad is also one of the best means of characterisation in the whole series. 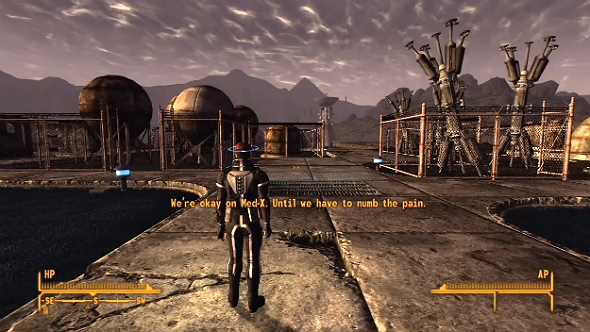 The Mk II Stealth Suit is not technically a companion, but its built-in AI was an invaluable member of my team during the New Vegas DLCs.

Aside from chattering adorably in the background, it serves to warn you about impending threats, and automatically applies healing when you are damaged (as long as you have the appropriate stimpaks). If all that is not enough for you, it is a stealth suit, and can help you disappear mid-brawl.

That is a lot more than Dogmeat has to offer. Just saying. 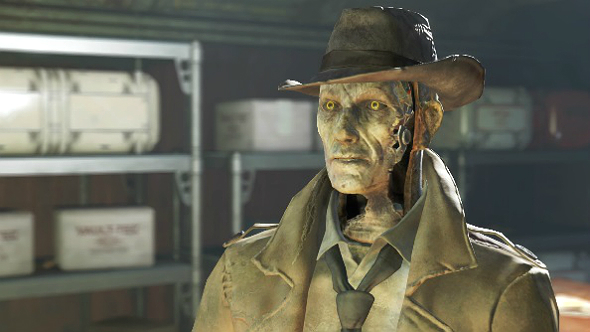 He has a name that looks great on a sign. That counts for a lot. And a drawl more film noir than a silhouetted trilby. But, most significantly, Nick Valentine has a face that is not all there – one that peters out into flaps of synthetic skin. He is a lightning rod for the identity issues of the Commonwealth’s synth population.

Implanted with the personality of a pre-war detective, Nick is perhaps the only person in the wasteland who remembers the things you do: the white picket fences, the relationships built on more than survival. Yet, like his face, those memories aren’t truly connected to his body. The hundreds-year-old love he still carries a torch for is not his; nor is the grudge he still bears against her killer. Yet those memories are the foundation of his character, and he cannot let them go.

It is testament to the strength of that tragedy that I kept him around, even as he refused to use the flamer I had upgraded for him at great expense.

Did we miss out one of your favourite Fallout companions? Let us know in the comments below.