Last year, I played a lot of Fallout 4. During my first forays into the Commonwealth, I loved it – the improved combat, sleuthing with Nick Valentine, all those lovely sets of power armour – but the more I played, the more hollow the game felt. As an open-world action game, it’s pretty damn good, but as an RPG, as a story-based game, even as a Fallout game, it has some serious problems.

For the best Fallout, and other awesome games, check out our list of the best RPGs on PC.

Against my better judgement, I dived back in recently, beckoned back by the promise of DLC and the vast number of new mods. I knew what to expect this time, so at least I wasn’t going to be let down by my expectations. But even though I steeled myself against disappointment, thinking I knew what Fallout 4 was and was not, I came to the realisation that actually, I don’t have a clue what Fallout 4 is.

And I don’t think Bethesda do, either. 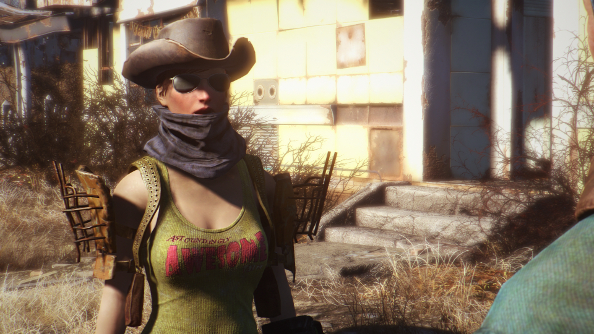 The base game is a smorgasbord of contradictions. It spins a personal yarn about family and the hunt for a lost child, but encourages you to do everything but search for your estranged brat. It offers up a huge world that you can explore with your customised parent, whose dialogue you select, yet there’s almost no room to be anything other than a hero. It gives you four very different factions to join, most of whom are opposed to each other, but you can join them all and nobody seems to care.

Fallout 4 has the most focused narrative of any game in the series, and yet seems to be largely devoid of identity or direction. You end up with the worst of both worlds: a Fallout with a poor story that restricts you, and an open-world that feels aimless.

The DLC, then, is an opportunity for Bethesda to provide more cohesion, consequences and the sort of diversity and personality that Fallout is known for; a chance to address the criticisms directed toward the main game. Four DLCs down, and they’ve mostly failed to do that. 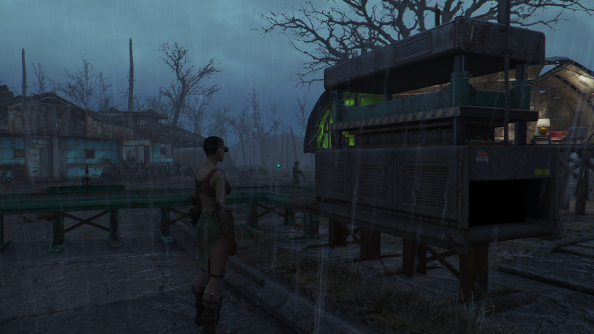 Of the DLC launched so far, three quarters of it is dedicated to crafting and building, giving little attention to the world itself. I can’t think of many games, let alone RPGs, that actually make a compelling argument for the existence of a crafting system, and Fallout 4 largely falls into the same pit of making people spend hours picking up junk for the thrill of adding some more numbers to a gun or piece of armour.

Construction, on the other hand, was actually surprisingly well thought out in the vanilla game. Buggy, fiddly, immensely frustrating and dragged down by weird limitations – but ultimately enjoyable. I spent countless hours creating settlements, designing checkpoints complete with sections for imagined customs officials, elaborate watchtowers, bars, bunkers and barracks. Despite being new to Fallout, the system fit in perfectly. Indeed, I’ve always felt rebuilding society has been something that’s always been missing in many post-apocalyptic games.

The problem is that it never actually goes anywhere. Once you’ve built your fancy new home or guardpost or what have you, nothing actually happens. Maybe a settler will sit inside it? Like the rest of the game, the settlement construction system is large and ambitious, but devoid of any real soul. It’s mostly cosmetic. 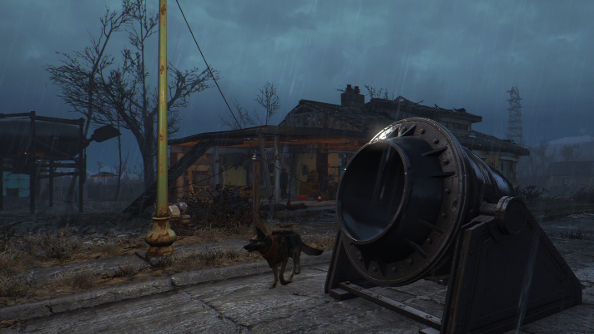 But Bethesda have doubled down, focusing their DLC efforts on expanding construction by… adding more stuff that doesn’t really do anything. There are more objects that you can plonk down, and now you can even faff around with logic gates and conveyor belts, but for what purpose?

The Wasteland Workshop DLC, for instance, stuffs the game with new lights, signs, walls, and assorted repurposed garbage, but it’s all just window dressing. The meat of the pack, the capture cages and traps, aren’t much better. You can kidnap beasties and even raiders and ostensibly make them fight – when it actually works – but it’s a lot of work for very little payoff. Essentially, it’s a mod pack. But one that’ll set you back a fiver.

I don’t even dislike these small DLC installments – they’re fun diversions. But that’s the one thing that Fallout 4 never lacked. And settlement construction has been like catnip to modders, so it’s been massively expanded by the community already, for free. It’s an utterly bizarre place for the studio to put its energy into, when what’s actually missing are the meaningful quests and character development that the series was best known for, until now. 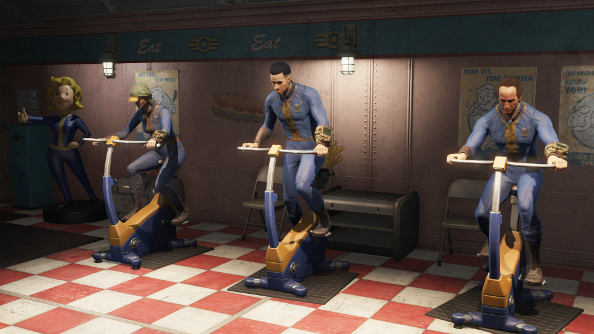 The next bit of DLC, the Vault-Tec Workshop, looks to continue this weird direction. We’re now able to build and run a vault as an Overseer, running experiments on its inhabitants. It is perhaps the most baffling expansion of the lot, since the vaults are part of the world’s past, the place where all but Fallout 2 and New Vegas’ protagonists leave at the start of their quests.

Fallout 4 shadows the beats of the series, while its DLC feels more like a spin-off; novelties that are more evocative of the Fallout Shelter mobile app than any of the core games. They’re just so detached from the game-world, and together they push Fallout 4 further and further away from its RPG roots.

Far Harbor is the faint light in the radioactive murk. Despite being set in an entirely new area, it’s a lot more connected to the main game than the rest of the DLC, and it shows signs of Bethesda almost remembering what a Fallout game can be, with more thoughtful, impactful dialogue that’s connected not just to how you imagine your character, but how you’ve grown their stats as well. It helps that Nick Valentine plays a big part in it, too, since he’s absolutely the best companion in the game. 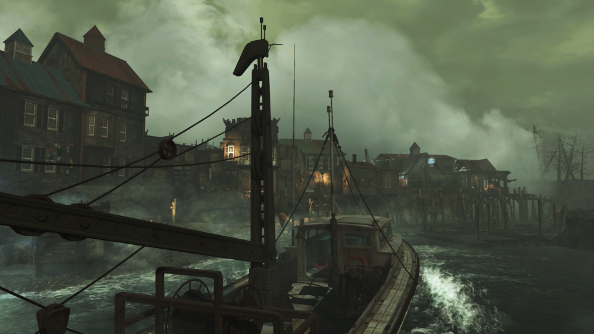 One more proper expansion is on its way later this year, as well, in the form of Nuka-World, set in a dilapidated amusement park filled to the brim with raiders and villains. One of its most notable features – and the one I’m most interested in – is the ability to lead raider gangs and conquer settlements as a blood-thirsty, latter-day Genghis Khan. As fun as that sounds, I do worry, however, that this will merely solidify my opinion that Bethesda are just throwing ideas against the wall to see what sticks.

With the base game, Bethesda created the conceit that you’re a hero, or at worst a disinterested wanderer who loves his or her son. Aside from very few exceptions, the most villainous thing that you can do is choose not to help someone. It’s a role-playing game that pretty much chooses your role for you at the start. Sure, you can still inexplicably eat people, and by the end of the game, you’ll have probably killed a mountain of raiders, mutants, ghouls and the odd dog, but as far as the narrative is concerned, you’re a pretty decent person.

So how does conquering settlements at the head of an army of murderers fit into all of that? If you joined the Minutemen in the base game – which it encourages – it makes even less sense, since you’ll have already spent a plethora of hours saving and protecting settlements, and maybe even becoming the leader of a group dedicated to that noble goal. I’m not sure there’s a way to make it sit comfortably next to the rest of the game without it being a standalone story with a new, less than heroic, character. 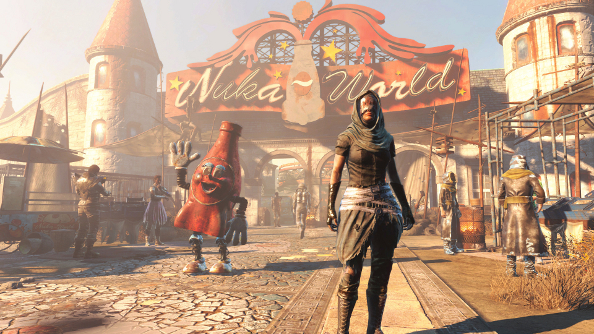 Nuka-World will also be, lamentably, the last Fallout 4 DLC, leaving the list dominated by things that resemble mods and do little to expand or enhance either the story or the world itself. Inconsistencies and an overall lack of cohesion plagued the game, and the DLC is likewise infected by this meandering, frustrating lack of direction.

It is perhaps apropos that the game will end in a theme park. After all, that’s what Fallout 4 really is: a series of largely disconnected rides and experiences that are often entertaining, but for the most part shallow and not quite as good as they seemed in the brochure.