Fallout 4's settlements system isn't for everyone. Though it was exciting to see such a feature make it into the game, settlements never really had much of an impact on the main quest, and no matter how long you spend working on each plot they never feel like an organic, lived-in part of the Commonwealth. As an idea it's dripping with potential, but with a restrictive in-game build limit and an overdependence on the player, its implementation scarcely realises even a sliver of that promise.

You can spend a hundred hours sprucing up Sanctuary alone and still wind up with a lifeless settlement that more closely resembles set dressing than a credible post-apocalyptic community. And to do even that much places enormous strain on you. Every last wall, piece of furniture, and ornament needs to be painstakingly placed; you have to find space for a robust power network; you need to ensure there's enough food, water, and shelter for everyone; and if you don't keep the place adequately fortified then you'll have to repair the damage. Nothing happens without you, so even after you down tools, stand back, and reflect on the town you've crafted from scratch, it's hard to shake the feeling that this is all just an elaborate dollhouse.

That is, until you start experimenting with Fallout 4 mods, and in particular Sim Settlements 2 and Rise of the Commonwealth. These mods effectively automate settlement construction, leaving you to handle the big picture stuff like taxation, supply lines, defences, maintenance, recruitment, and even tourism. The experience is transformative. You decide on a city plan, pitch in with supplies, and organise things at the macro level, and over time your settlers build a whole city. Every one of them has something to do, new municipal plots like caravan services and power plants add more variety, and there's always something new to survey whenever you visit.

This got me thinking: what if Fallout 4 had a city builder spinoff? Mods can get you surprisingly close to that experience, which is a marvel considering the limitations of Bethesda’s Creation Engine, but there’s so much more potential to explore. 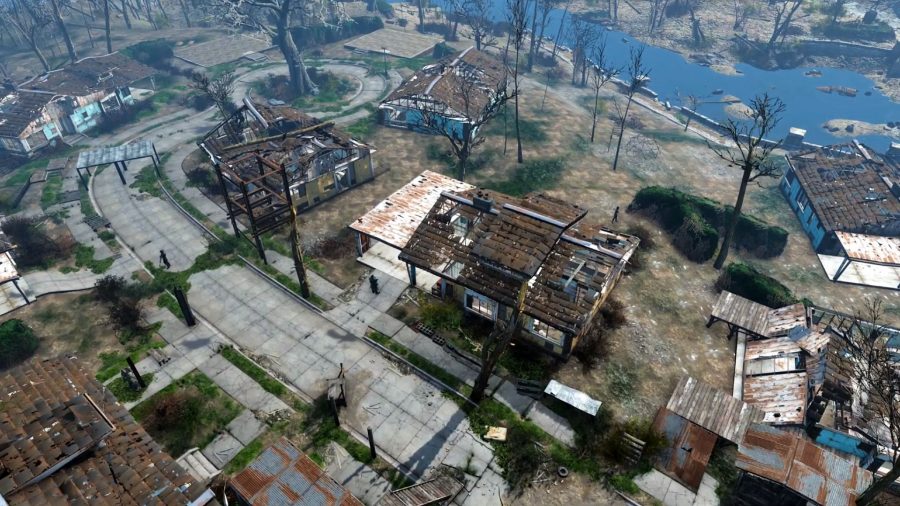 A standalone city builder with its own setting and lore is pretty unlikely given Bethesda’s reluctance to expand on the series’ lore outside the main games, so we’re going to imagine a non-canonical Fallout 4 spinoff – a bit like Fallout Shelter – that casts us as Preston Garvey, leader of the Commonwealth Minutemen. Our goal is to form a community of allied settlements, transforming each outpost into a strong, self-sufficient township.

You decide on a city plan, pitch in with supplies, and organise things at the macro level, and over time your settlers build a whole city

Starting in Sanctuary, you manage your small population of survivors, scrapping the rusted cars and dilapidated buildings of the once idyllic cul-de-sac in order to build a bustling outpost. Once you’ve depleted the local resources, chopped down the charred remains of the forest to the north, and ransacked Vault 111, you can start sending out scavenger parties to bring back rarer crafting materials and scraps of beat-up tech. The early game is all about getting things up and running. Wind turbines, water pumps, fruit and vegetable plots – the basics.

As soon as your settlement has found its feet you’ll start getting attacked. Perhaps a few raiders at first, but more numerous, better-equipped raiding parties as you gain notoriety. In time, you’ll graduate from fending off ramshackle raiders and feral ghoul hordes to taking on super mutants and platoons of Gunners. 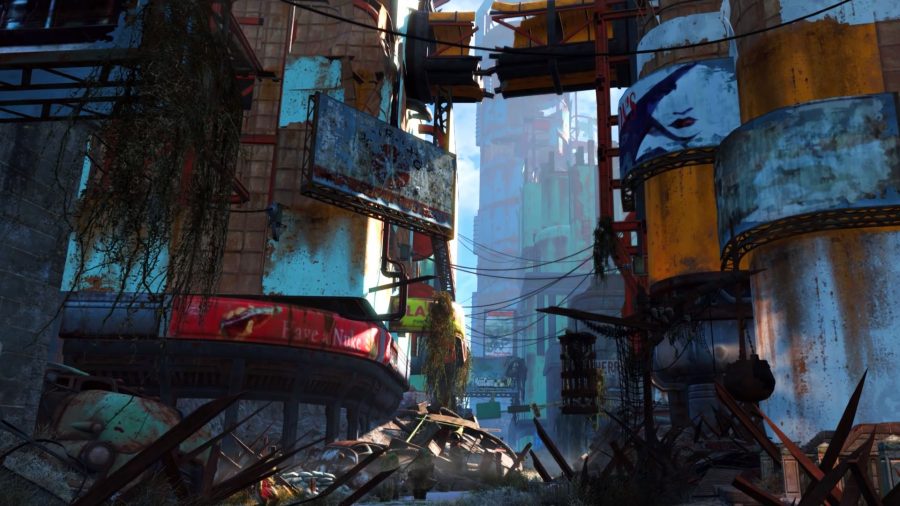 Bethesda could even flesh out a diplomacy mechanic, allowing you to make enemies of the Institute or Brotherhood of Steel depending on how you react to their demands.

Much like in Fallout 4, you can set up turrets and fortifications to repel attacks, and as you advance through the tech tree you’ll unlock access to mini-nuke mortars, miniguns looted from Vertibirds, and Tesla cannons. As we’re breaking from canon, Bethesda could probably invent a reason to drag some tech from New Vegas over so we can launch orbital laser strikes on anyone who dares cross Sanctuary.

Eventually, you’ll be able to connect with and start developing other outposts under the Minutemen’s banner. Each settlement can pose a unique challenge. For example, Somerville Place’s proximity to the Glowing Sea might make radiation storms a common occurrence, requiring you to build with materials that have a high radiation resistance or risk your people suffering the side effects. Meanwhile in Murkwater Construction Site, just to the southeast, you face the combined challenge of building on a swamp and keeping the local mirelurk population at bay. 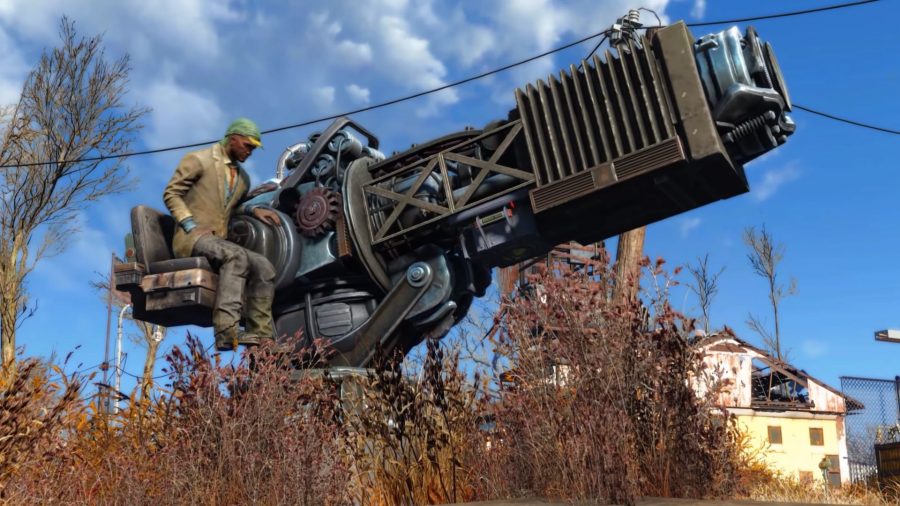 As you approach the endgame, you’ll build robotics workshops, train Deathclaws, and manage a highway of brahmin caravans that snake through downtown Boston and further afield, bringing in more supplies and caps for the Minutemen’s coffers. Sanctuary will have developed from a pile of rubble into a jury-rigged metropolis that rivals the nearby Diamond City, with its commercial, residential, industrial, and agricultural districts working in harmony.

Bethesda has, understandably, been very protective over its keystone franchises like The Elder Scrolls and Fallout, only branching out into other genres where the mass market appeal has been too tempting to ignore. A spinoff city builder is therefore unlikely, but if the concept strikes a chord with you then I’d suggest checking out the aforementioned mods to revel in the fantasy just a little while longer.

What if?’ is PCGamesN’s regular feature series. Check back every Saturday for more hypotheticals, from thoughtful speculation about actually-plausible industry developments, to dream crossovers, to nonsense like Half-Life 3 happening. If you’re yet to explore the Commonwealth then you can buy Fallout 4 here, or you can grab it via Game Pass for PC instead.