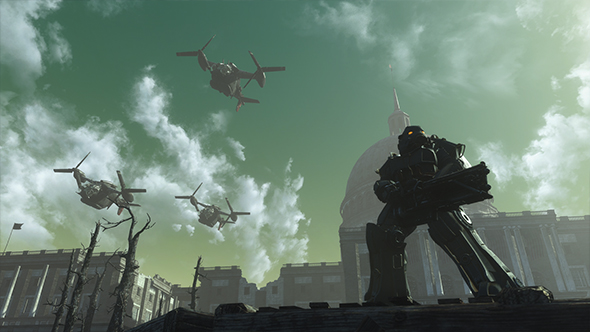 Capital Wasteland was an impressively ambitious effort to recreate all of Fallout 3 in the Fallout 4 engine. I say “was” because the development team has chosen to shut down the project after speaking with Bethesda about the legality of the mod. The Fallout publishers didn’t mandate the mod be shut down – after all, mods have helped keep those open-world RPGs lively for years – but after contact with the official team the mod is now no more.

Get yourself some of the best RPGs on PC.

The issue seems to stem from Capital Wasteland’s use of Fallout 3 voice files in remaking the game. That would require the modders to either distribute the voice files with the mod, a definite legal no-no, and a proposed solution that would allow players to rip from their own copies of Fallout 3 was similarly untenable.

If you guys haven’t already heard the unfortunate news The Capital Wasteland Project (Fallout 3 in Fallout 4) is stopping development, here is their official statement. (Video on the topic coming shortly) pic.twitter.com/OMN1ZvKhbZ

Mod lead NafNaf_95 tells Kotaku that Bethesda can’t grant the rights to use the game’s voice acting, since it’s licensed rather than owned by the company. That means that the game’s celebrity voice cast, including Liam Neeson and Ron Perlman, would have to be replaced, and the small team wasn’t prepared for the task of replacing those “iconic voices.”

NafNaf says “Bethesda didn’t technically shut us down. But a few members of staff heavily hinted at our methods being illegal.” He contacted a lawyer some time afterward to confirm those suspicions, and the legal counsel said, more or less, everything the team was doing “was sketchy as all hell.”

He also says that the team behind Fallout 4: New Vegas, a similar mod aimed at bringing Obsidian’s game into the new engine, has decided to undertake the task of rerecording all that game’s dialog.

Original story, January 17:Fallout: New Vegas isn’t the only wasteland wandering simulator getting updated to modern standards, as Bethesda’s own Fallout 3 is getting an extensive mod bringing into the Fallout 4 Creation Engine.

Capital Wasteland will bring all of Fallout 3’s world, content, and quests to the new engine, including all the weapons, armor, and NPCs you’d expect from the bombed-out Washington. The new trailer shows off everything from Megaton to the Capitol Building, and it’s all looking quite nice – especially with some of that sweet Liam Neeson voiceover bringing it home.

The mod won’t feature any of the extra DLC locations, except for those areas that are part of the main world, though it’s possible that could change once the main mod is finished. It also won’t be bringing Fallout 4’s settlement system back into the capital wasteland, though you will have some expanded choices for player housing.

This one doesn’t have anything to do with the Fallout 4: New Vegasmod, but history has shown that scores of Bethesda (and Obsidian) fans are willing to keep on porting old content to new engines, and it shouldn’t be surprising that Fallout 3 is next on the list.