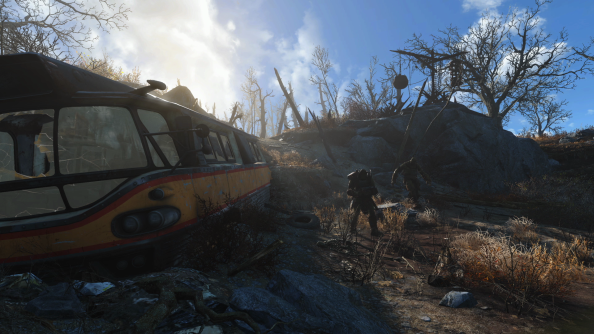 When I say you might want to broaden your perspective in videogames and accept a wider viewpoint, I’m not being condescending. I mean this is something you might literally want to try, if you’ve been feeling hemmed in by Fallout 4’s default FOV value of 80. However I do accept that my patting you slowly on the head while I tell you about it is probably crossing the line. Redditor Greyfell has compiled a handy guide on how to tweak the FOV, and other settings, and it’s super easy.

If buffs, perks, and crits are your jam, check out our best PC RPGs.

Here’s Greyfell‘s guide to tweaking the in-game FOV, rather pointedly titled “How to make Fallout 4 PC not feel like shit”:

– In the [Display] section of both files, add the following lines:

90 is the default FOV of most FPS games, but you can change that to whatever makes you happy”

However, a Steam community post goes into a bit more detail with the FOV tweaking, stating that three separate files need to be edited to successfully alter your field of view in first-person and third-person perspectives. Here’s Steam user Gabi’s guide:

“Firstly go to your Fallout4.ini (loacted at C:\Users\[name]\Documents\My Games\Fallout4\) and under [Display] put the below:

I feel 90 is what will probably be best for most, but tweak away. 🙂

Next go to the Fallout4Prefs.ini and do the same directory as above (C:\Users\[name]\Documents\My Games\Fallout4\), under [Display] put:

Next go to where you installed steam then open steamapps\common\Fallout 4\Fallout4 (a folder called Fallout 4 is in another folder called Fallout4, how many levels deep does this go 😉 ). Next open the Fallout4Prefs.ini here and once again under [Display] add the below:

I feel 90 is what will probably be best for most, but tweak away. 🙂

Note, the fov options under [Interface] in Fallout4.ini do not need to be changed for this to work.

Your FOV should now be changed for both first and third person. 🙂

Finally to change you gun model (and pip body fov) do the below.

If you find your pipboy to be to small, press ~, the type fov XX, where XX is a smallish number if you want it to be larger on screen and vice versa. This will take same trial and error like the fov to get what you like. Next type in refreshini, doing so will make it so your game will not revert to the default 80 fov. Next press ~ save your game and from that point on you should be good to go.”

Gabi’s comprehensive guide also walks you through the processes of disabling hardware mouse acceleration and adjusting vertival and horizontal sensitivity (they’re set at wildly different values currently, and that’s combining with the mouse acceleration settings to feel a bit…wrong).

There’s .ini tweaking guides on unlocking 21:9 and 4:3 aspect ratios and unlocking frame rates, too. The latter’s handy if you’re experiencing microstutter or are finding your FPS capped at 30, rather than the intended 60.