Since its release last November, Fallout 4 has been subject to many a mod courtesy of its inventive, artistic and at times downright weird community. Today, publisher Bethesda announced the game’s first trio of official add-ons are set to land in March, April and May, respectively, one of which looks fairly substantial. The publisher also announced that an “expanded DLC plan” will see the cost of season passes rise in price.

The best Fallout 4 mods tend to be more serious in nature, but there’s also those that turn Deathclaws into Macho Man Randy Savage and such.

The first add-on that’s due next month is Automatron. Here, a “mysterious Mechanist” has set a bunch of bothersome robots loose in the Commonwealth and it’s on you to round them up, harvest their parts, and thereafter mod your own custom robot pals. “Choose from hundreds of mods; mixing limbs, armor, abilities, and weapons like the all-new lightning chain gun,” say Bethesda. “Even customize their paint schemes and choose their voices.” New Vegas’ Robobrain will also stage a return.

Second, due at some point in April, is Wasteland Workshop – an add-on that lets you design and set traps to “capture live creatures”. Once you’ve successfully detained unsuspecting folk and beasts against their will – “from raiders to Deathclaws” – you’re expected to tame them, or “have them face off in battle, even against your fellow settlers.” Wasteland Workshop also comes with new settlement design options. 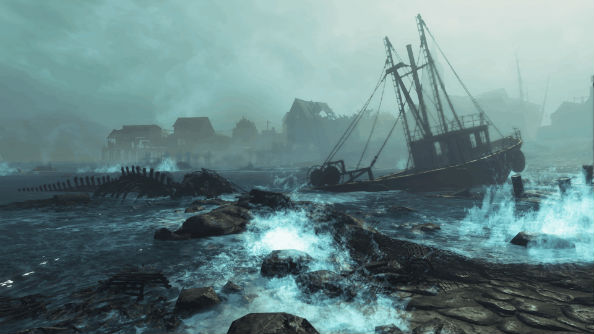 Lastly, and by far the most interesting sounding piece of DLC, is Far Harbor, due in May: “A new case from Valentine’s Detective Agency leads you on a search for a young woman and a secret colony of synths,” say Bethesda. “Travel off the coast of Maine to the mysterious island of Far Harbor, where higher levels of radiation have created a more feral world. Navigate through the growing conflict between the synths, the Children of Atom, and the local townspeople.”

Far Harbour, so say Bethesda, has the largest landmass in any add-on they’ve ever created.

As for the Creation Kit – Bethesday are “also hard at work” on making it A Thing.