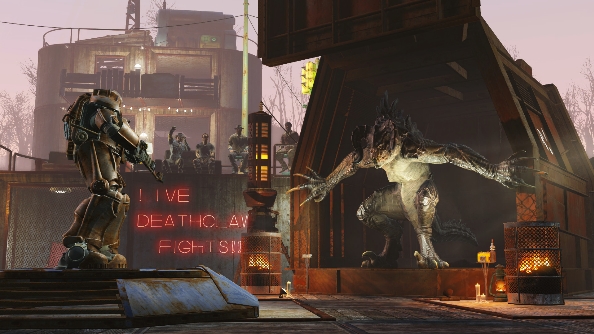 Last week our own Fraser Brown spoke about how Bethesda don’t know what Fallout 4 is anymore, lamenting that the series is now an unfocused mess of ideas. He made a good argument, but I’m here to convince you of the opposite.

Want to make your own changes to the wasteland? Try some of the best Fallout 4 mods.

Bethesda know exactly what Fallout 4 is. The problem is, for many people, that Bethesda haven’t made an RPG. But that’s no mistake.

Instead, Todd Howard and his team have created an open-world game that’s half-immersive sim, half-Minecraft. I believe that’s a very intentional move. The game isn’t described as an RPG on its Steam page (it’s a ‘next generation open-world’), and taking a different, more adult spin on Minecraft makes all the sense in the world, both for getting people interested, making DLC, and keeping gamers playing.

Fallout 4 has a distinct unifying theme that makes it suitable for being a construction sandbox, and that’s rebuilding. Practically every major thread of the world comes down to it: you’re a parent looking to rebuild their family, who can join a man looking to rebuild a sense of community, in a world desperate to rebuild itself. Every faction in the game aims to dig its way out of the shitstorm the nuclear apocalypse caused. This means one of Fallout 4’s core mechanics – scavenging and crafting – links solidly to its major theme. Few open-world games do that. 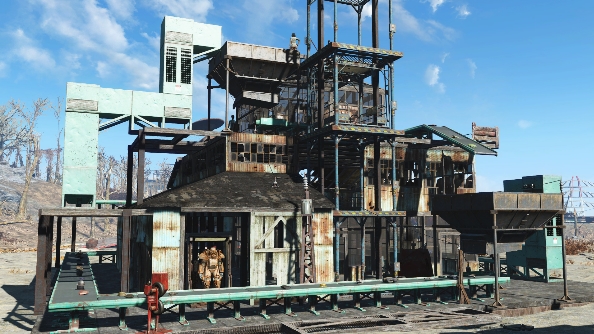 With rebuilding being the predominant theme that Bethesda wants to explore, creating an open-ended RPG in the manner of classic Fallout games simply wouldn’t work. Allowing a player to go all-out evil would be too much a diversion from the noble role of parent and rejuvenator. But while Fallout 4 restricts personality development, there’s still plenty of gameplay variation: be shooty, be stealthy, be stompy. That’s because Fallout 4, instead of an RPG, is an open-world immersive sim; it’s post-apocalypse Deus Ex. All the depth of lore, but with prescribed paths rather than free-form character development.

If you’re a die-hard RPG fan it’s easy to understand why Fallout 4 would disappoint. But the game belongs to Bethesda, and they’re the ones sailing the ship. They dramatically changed direction with Fallout 3, and Fallout 4 is the next port of call. Each new game pulls us further away from Fallout 1 and 2, but that doesn’t make them worse games. They’re just different.

This port of call won’t be remembered for its hunt for a missing child, though. It will be remembered as the game which gave new, meaningful purpose to digging through trash. The ashes of the old word can be collected and used to erect castles, outposts, factories, and forts, rather than simply sold at junk vendors. Beyond Fallout 4’s story and quests is a whole toy box for the budding engineer. Each new DLC pack throws more elements into the mix, allowing further experimentation and ambition. Sure, Far Harbor is here to cater for the sizable collection of players who want more story, but end-game for Fallout 4 means building. 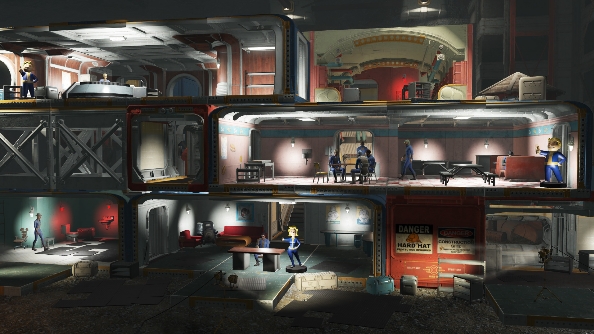 There’s a legitimate complaint in the fact that nothing you build in Fallout 4 has strong impact on the world; your new settlements don’t exactly resurrect the land. And while I think that would be a very welcome piece of feedback, I think that suggests that you are building things for a very specific end outcome, rather than for the joy of using the game’s construction mechanics. This isn’t SimCity, it’s not about the end result. It’s The Sims: the enjoyment is in the creation itself.

You need only look to Fallout 4’s obvious influence to see players love doing this. Nothing you do in Minecraft has an impact on its world, yet the game’s community thrives and basks in the glory of creation for creation’s sake. Fallout 4 fills a market gap for a more ‘logical’, realistic sandbox crafter: all the creative possibilities, but with real-world materials that make sense and look cool. It’s Minecraft for adults, basically.

The DLC plans only extend this. The new Vault-Tec Workshop, which sees you create your own vault and experiment on vault dwellers, may not make much sense for the lore and time setting of Fallout 4, but it offers players a whole new toolset and the promise of more hours of fun creativity. If you have any interest in the game’s crafting, I have a hard time believing you’d turn down the chance to construct the most iconic element of Fallout’s world.

Creative sandboxes are also incredibly good for community. Take a look at the video above, which demonstrates an excellent armour production factory that’s been built with components from the Contraptions DLC. Not only does it appear to have been put together with love and ambition, but it’s a highly shareable video. “Wow, look at this cool thing someone made in Fallout 4!”. That leads to subreddits, and when fed with new content (see: DLC) that community persists and grows. An RPG certainly does well in regards to discussing anecdotes on Twitter, but it can’t compare to the bragging rights a cool creation can.

While it’s true that the modding community have done a lot for Fallout 4’s construction and settlements side, I’m pleased to see that Bethesda haven’t left it solely to them. It demonstrates that the creative aspects of the game aren’t a tacked-on side-thought to tick a box for a wider audience. They intend on serving that audience with well-designed, professional content. Without it, we probably wouldn’t have ever had the tools to create this delightful/stomach churning automated abattoir.

Fallout 4 isn’t the game I hoped it would be. Like many, I wanted it to be a top-tier RPG. But I do admire what it has become. It’s a new direction for the series; not a bold one, but an interesting and well-executed step down a new path. I had my time with its enjoyable, if narrow story, and am happy now to leave the game in the hands of a community far more creative than I. And while I lament that I’m not part of that group due to personal taste, I’ll never begrudge Bethesda for the changes they made. Because this wasn’t an accident. This was a developer innovating, changing, and discovering new ideas. Bethesda know exactly what they’re doing with Fallout 4 and, if this experiment is deemed a success, they know exactly what lies in the series’ future, too.