Doom. Wolfenstein. Fallout 4. Three big games that you can now experience all in go (in a manner of speaking). A new Fallout 4 mod brings outfits, weapons, armour, and even quests from the worlds of Wolfenstein and Doom to Bethesda’s post-apocalyptic RPG. Oh, and there’s a custom jetpack, too.

The Blazkowicz mod – surely named in honour of heroes of the same surname found in both series – by creator The_Rotton_Core is an “Id Software fanboy mod” that includes a whole bunch of stuff inspired by the games. There are two outfits, which you can find in ‘BJ’s Workshop’ and upgrade at its armour workbench. One is William BJ Blazkowicz’s iconic yellow jacket and zip-fronted trousers (complete with Airborne Infantry t-shirt underneath) from Wolfenstein 2: The New Colossus.

The second is the leather jacket ensemble from Wolftenstein: The New Order. Best of all, both can be worn – and look pretty awesome – on your male or female player character. They also have special effects that boost your stats if you fall under 25% health.

Next up is the Praetor suit armour from Doom (2016) – you know, the one worn by the Doom Slayer himself. It has boosted movement speed and jump power for “maximum mayhem,” plus other benefits like ‘Glory kill’ – enemies with less than 10% health will explode into bits – and a custom jetpack. Finish the first quest and you’ll get this as a reward. 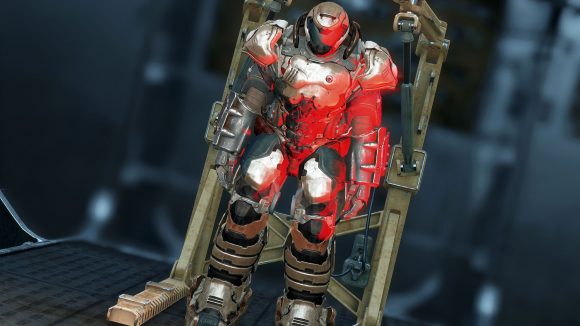 Also included in the mod is a double barrel shotgun, ‘Old Blood’ pipe, decals, and a modified ranger mask inspired by Wolfenstein and a ‘Blazkowicz family settlement’ up for grabs.

Plus, there are three quests, there aren’t any details on the first two on the mod page, but the third is called the ‘harbinger of Doom’ quest, and will see you take on a ‘cyber demon’ from the 2016 Doom and then the ‘Icon of Sin’ – Doom II’s final demon head boss. All while wearing the Doom power armour, of course.

If you’re keen to bring some Doom and Wolfenstein to the Commonwealth, the Blazkowicz Fallout 4 mod is available on Nexus mods.