This Fallout 4 mod is called Northern Springs DLC, and even though it’s not a Bethesda product, its scale definitely puts it on par with Fallout 4’s official DLC offerings. In addition to a gigantic new world area to explore, there’s new weapons and armor, four new fully-voiced companions, three new settlements, new enemies, and a full story questline to discover.

The Northern Wasteland is a snow-covered rural area, with power pylons and forests covering much of its frozen expanse. It’s also meant for high-level characters – the creator, a modder who goes by jshrapnelc, says players should have their character at level 40 if they expect to survive.

Mods and role-playing games go together like peas and carrots. Here are some of the best RPGs on PC.

Based on the video below, it looks tough as nails. After some fighting with Brotherhood of Steel troops, the player is beset by ghouls of every description, who hurl themselves around corners in that weirdly disturbing Fallout 4 way.

The place is apparently haunted, too. Judging from some of the images on the NexusMods page, one NPC you meet is the ghost of a ghoul, and this figures into the questline somehow. Jshrapnelc says there’s also “random ghost spotting,” which I’ve heard is terrible for property values. You’ll also get to meet  and potentially recruit the Vault-Tec salesman from the Fallout 4 intro sequence, who is now a 200-year-old ghoul and much less cheerful than he was when you first met him.

There’s a lengthy combat preview video available, if you’re up for a taste of what the mod plays like. You also get to see some of the mod’s hand-crafted environments, which are certainly in keeping with Fallout 4’s overall scappy aesthetic, even with the added snow.

There’s a ton to explore, and you don’t need to follow the main questline that’s included if you want to check out what Northern Springs has to offer. Maybe you’re looking for a good place to record a podcast? This studio might do the trick: 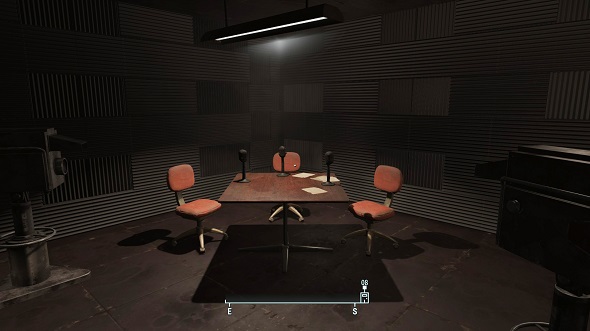 You can find the Northern Springs DLC mod at NexusMods. Jshrapnelc and company have been working on this thing for two solid years, he says, and have done a lot of playtesting. If you’re looking for something to tide you over until Fallout 76, this might do the trick.