Bethesda have announced a big revamp to the way you beef up your character with Perks in Fallout 4. There are now ten Perks for each of the seven SPECIAL stats you distribute across your character build when creating them. Plus, those perks are ranked, so they’ll do new and exciting things as you rank up.

Don’t you just love Todd Howard’s voice? He makes the new Perk system sound like conclusive proof that everything’s going to be alright forever in the new Perk system trailer. I’d be just as happy listening to him read lines of code from the game engine. What the Fallout 4 game director’s explaining is this: your character has seven SPECIAL character stats, as in previous Fallout titles: Strength, Perception, Endurance, Charisma, Intelligence, Agility, and Luck.

Bethesda’s releasing a video series which explains each SPECIAL stat, one by one. You can watch the Endurance episode here.

Each one of those stats has a Perk tree associated with it, with ten Perks for each SPECIAL stat (check out the poster image below for all the perks). Fallout 4’s new spin on the system is that you can walk out of the vault with the level 10 Perk if you spend your points heavily on one SPECIAL. The example Howard gives is gaining the Intimidation Perk, the level 10 Perk in the Charisma tree, right off the bat. You can start getting other poor saps to do stuff for you right at the start of the game. You’ll also get the chance to re-spec your character after playing for a little while, if you like.

As you progress through the game though, you’ll be able to rank up those Perks, which will gain you new skills and abilities. That brings the total number of Perks up to 275, which is going to make character progression a pretty involving process.

Having such ostensibly powerful Perks from the off sounds like it might unbalance the game for certain character builds, but Bethesda’s on it. The lowest rank of each SPECIAL stat’s level 10 Perk really homes in on a particuar playstyle, so it’s less about outright power and more about options. Bethesda say they’ve been working hard to get the balance of each perk combination right.

Levelling itself will occur at a faster pace than in Fallout 3, the developers say on Fallout 4’s official site, paced more like Skyrim’s. There’ll be no level cap, either. 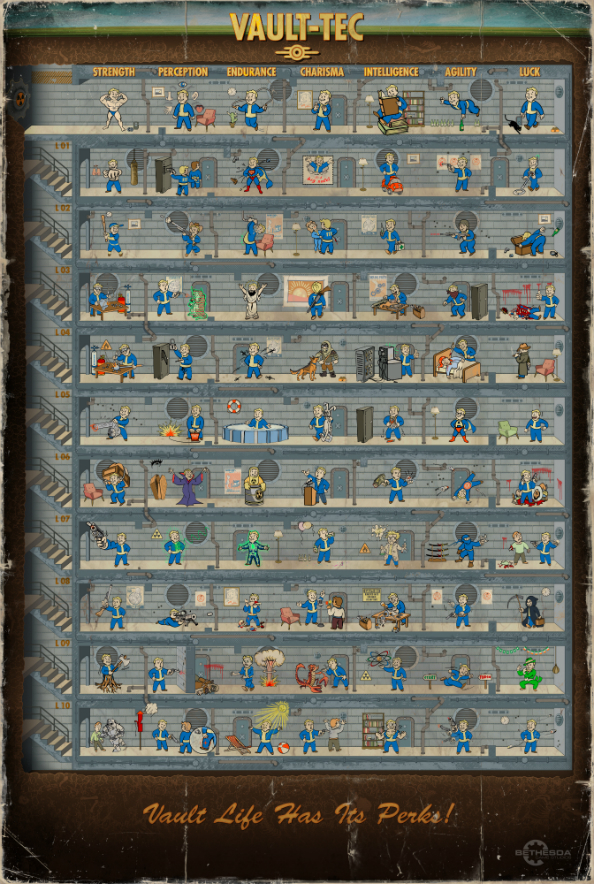