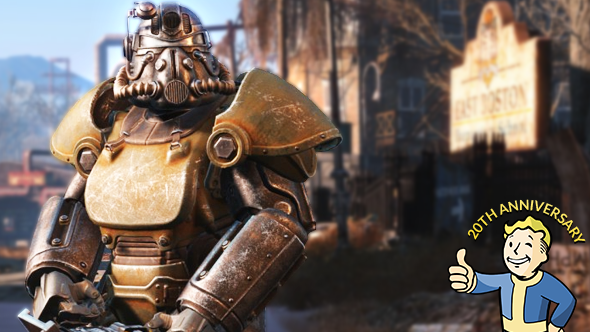 One of the biggest criticisms levelled at Fallout 4 is how the protagonist has only a slightly broader vocabulary than Hodor from Game of Thrones, a man who can only utter his own name. Where previous Fallout games had epic monologues from NPCs and reams of dialogue choices – some of them tailored to suit your playstyle – Fallout 4 opted for a more streamlined approach. Instead of lengthy exchanges, snappy back and forths fill the game, and your responses are limited. Remember the shift between The Elder Scrolls: Morrowind and Oblivion? This was Fallout’s time.

While some fans accused Bethesda of dumbing the series down, this reduction in scope was likely caused by development focus increasing in another area: action. In a recent interview with PCGamesN, Fallout: New Vegas’s lead designer, Josh Sawyer, said: “If you choose to make one aspect of the game more complicated, then it helps to roll back on other stuff.” This was probably the case for Fallout 4, with more resources dedicated to making the moment-to-moment play feel good.

If you focus on the dialogue choices, the series appears to have taken a step backwards, but you are ignoring all the areas where the game took massive steps forwards – huge, stomping, power-armour-clad strides. Yes, the power armour in Fallout 4 is a shining example of how far the action in the post-apocalyptic RPG series has come. Once a glorified armour piece that you equip in your inventory, power armour in Fallout 4 turns you into irradiated Iron Man, Mad Max with a robotic Batsuit. 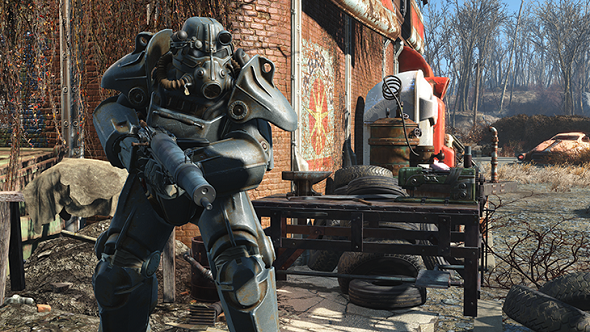 The first suit of armour you get is located on the roof of a building about an hour into your adventure. You have to grab a fusion core to power the thing, slotting it into the back of the suit before turning a crank on the rear – it hisses and opens up, allowing you to step inside. Once you are in, you rip a minigun from a downed vertibird and jump down to the street level, landing in a cloud of dust with a thud. There is no need to pause the game and head into the VATS targeting system, you just stomp down the street with the trigger squeezed, spraying rounds all over the street ahead, kicking up dust clouds, lopping off limbs, and detonating nuclear cores on abandoned vehicles. It is absolute carnage, and that is before the deathclaw even turns up.

Fallout 4’s combat sings outside of this metal skeleton, too. Armed with a bolt-action rifle, creeping through the irradiated wastes as packs of feral ghouls munch on a nearby corpse, the tension is palpable. When the action does kick off, each shot lands with impact, the hefty physics lending a weight to every crunchy cadaver. The crispy critters move unpredictably, too – sidestepping shots and tumbling through open windows. Early into Fallout 4’s development a decision was made to rework the RPG’s action. To do this, Bethesda brought Doom developers id Software in to offer advice, and the impact of that choice is clear as day. 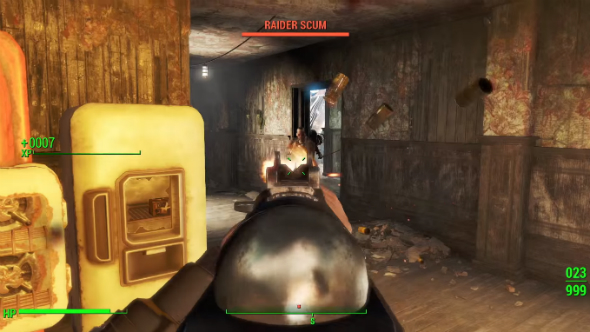 This might have come at the cost of deep role-playing mechanics, but the action in Fallout 4 is sublime, especially for an RPG. There is still a twisting, branching plot. It is still chock-full of memorable characters and companions. Bethesda still manage to tell hundreds of stories with props, posing skeletons in such a way that you can piece together the story of how they died, or rigging some twisted toilet shrine with teddybears and candles. You are still pulled into the world that way. In fact, I would argue it is the most atmospheric, immersive Fallout game we have had yet – stick on headphones and trek through the eternal radiation storm of the Glowing Sea if you don’t believe me.

If you are still upset about the dialogue system being stripped back, Bethesda know it did not work as well as it should have. They have said they will take the feedback onboard, at least. And if we do ever get another Fallout, thanks to Fallout 4 its foundations should already be laid down as sturdy as power armour – the work is already done on the feel of the game, so more resources can likely be dedicated to the writing, making sure it offers the number of options we’ve come to expect from the series. If that is the case, then I have a feeling the next game will go nuclear.