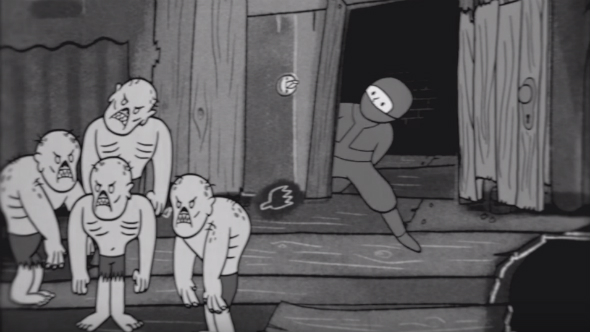 We’ve been doing a lot of thinking of Bethesda’s post-apocalyptic RPG recently. First Jeremy reasoned that Fallout 4 is an environmental storytelling masterclass, then Fraser took to the stand and announced that Bethesda don’t have a clue what the franchise is anymore. Finally Matt reasoned that Fallout is Minecraft for adults. All sturdy opinions, but mine’s the best of course, so read on.

It’s been nine months since Fallout 4 was released, and despite buying it on launch day and playing it on and off since then, I’ve only just started enjoying it – as a stealth game. Despite Bethesda’s attempts to overhaul the foundations of the series by revamping its shooting mechanics, adding construction tools and trying to give the game a worthy main quest, it’s their oft-derided stealth system that shines brightest in the Commonwealth.

Contentious as it may be, Fallout 4 isn’t among the best RPGs on PC.

It’s not that stealth in Fallout 4 is a particularly deep or engaging system, but it is one that forces players to take the game at a slower, less destructive pace. Stalking NPCs through corridors, carefully placing minefields to fall back on and slipping live grenades into the pockets of unsuspecting enemies only to scamper off like you’re from a cartoon has always been a liberating way of playing Bethesda’s Fallout games. It feels like you’re breaking the game and discovering a new method of clearing out a raider base besides simply shooting it up with the help of V.A.T.S. and Dogmeat.

By sneaking your way through the world of Fallout 4 you gain a much better vantage point for uncovering the innumerable environmental details and subtly told stories that make its world so complete. The stealth itself is entirely mechanical. Some fun can be had through exploiting it, but what lasts is the added detail one can glean through the more careful pacing it enforces. 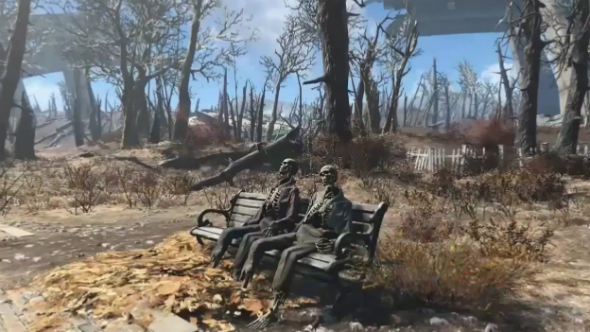 By playing the game with a stealthy character build you’re made to pick apart every environment: you don’t want to alert anyone, fall prey to a trap or miss a chance to reprogram a turret. Analysing every room and hallway of a dilapidated building in granular detail will almost always reveal a story about its past or present – tales of intrigue about the Raiders who now inhabit it might be found on a terminal or in a note. The harrowing final moments of an office clerk who had nowhere else to go when the bombs fell can be glimpsed from a spectacled skeleton cradling himself in a closed bathroom stall. They’re details you won’t always pick up when you’re charging from fight to fight, clad in power armour and bludgeoning everything in sight with a super sledge.

And finding a way to become immersed in the Commonwealth isn’t exactly easy either, thanks to the number of doors Bethesda routinely slam shut on the player through forced decisions and frustratingly final outcomes. The best stories in the game are those you stumble upon organically; by slowing down and gaining some perspective on your environment you stand a much better chance of finding them.

Playing through the game with an assault rifle or baseball bat reveals its own problems when compared to a stealthy approach, namely that Fallout 4 is really, really boring as a shooter. With poor AI, dull weapon feedback and mostly human enemies to face off against, even Fallout 4’s overhauled FPS mechanics can’t keep the combat interesting. Marching into a base and engaging in a lengthy, repetitive firefight with bullet-sponge enemies who only know how to duck or shoot wears thin very quickly. 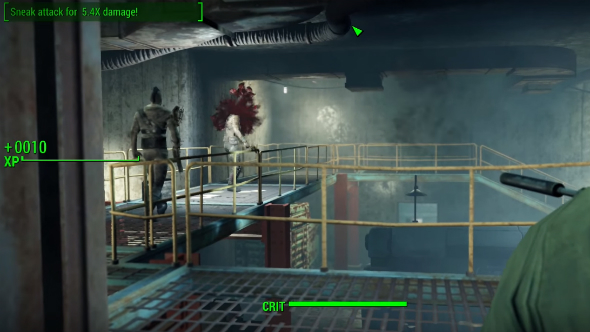 As poor a representation of real-life espionage as Fallout’s traffic light stealth system is, it’s still a reliable and solid framework for approaching most encounters in the Wasteland. It also allows for players to make use of the game’s entire arsenal, allowing them to take combat on from long range with a sniper rifle or get in close with carefully placed mines, melee weapons or a silenced sidearm. Getting spotted only opens up more opportunities for fun at the expense of the game’s idiotic AI, allowing you to toy with them by leading them into a trap or separating larger groups into single targets that can be picked off easily.

The ridiculousness of escaping a gang of Raiders by running into a cupboard and crouching certainly detracts from Fallout 4’s realism. However, knowing that you can manipulate the game’s world in such an explicitly mechanical way adds a layer of depth that’s otherwise missing from Fallout 4’s combat.

Stealth in Fallout 4 goes far beyond combat, it also turns the settlements of the Commonwealth into true hubs of exploration. Pickpocketing keys, hacking and lockpicking are the only tools players have for digging beneath the game’s surface without killing most of Fallout 4’s NPCs. If you want to find out more about Diamond City’s denizens, gain access to a special item, or see every inch of the curated game world, then sneaking is your best bet.

The fact that you can squat in the corner of someone’s well-lit house, while they go about their daily life, occasionally stopping to stare straight through you is something that should rob the game of any semblance of immersion – instead it does the exact opposite, drawing you in to get a closer look at the world’s virtual inhabitants, no matter how stupid they are. 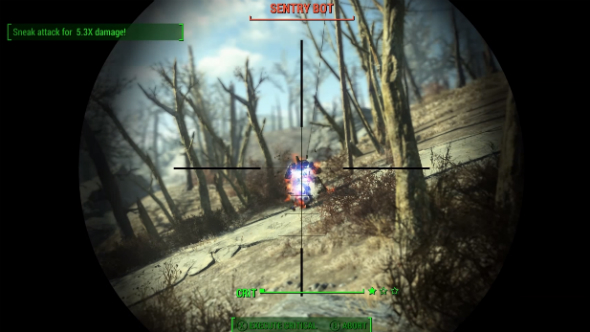 Stealth even scales appropriately, offering plenty of reward for choosing perks and items that complement a sneaky approach from the early game right through to the end. Mister Sandman grants a massive damage bonus for using silenced weapons while sneaking, the Ninja perk takes that a step further offering ranged sneak attacks a multiplier of 3.5x normal damage at it’s highest rank, and melee sneak attacks a staggering 10x multiplier. Then there’s the Sneak perk which at first simply makes you harder to detect, but eventually enables you to evade distant enemies entirely just by crouching. These options make eliminating Fallout 4’s toughest enemies possible in just a few hits – the trade-off being that if you get discovered you lose all of those damage multipliers. It’s punishing, but like any good stealth system, it teaches the player that they’re safest in the shadows.

In a game that can scarcely be referred to as an RPG, the immersive aspects afforded by Fallout 4’s stealth mechanics are invaluable. Slowing down and absorbing every minute detail of Bethesda’s rigorously designed environments is the closest Fallout 4 ever gets to being an immersive, open-world game. Played any other way it’s just a big, stupid playground, which is fine, but it’s not Fallout.