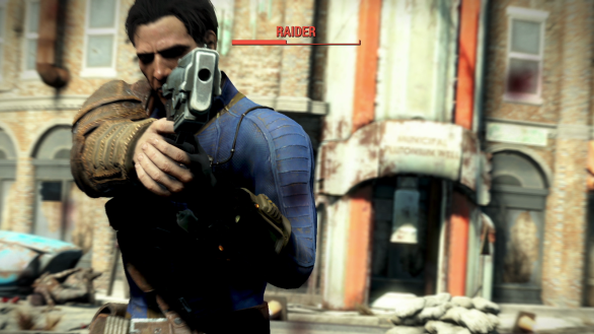 When Bethesda emerge from their Washington bunker on November 10th, after generations of toil and hardship in blue boiler suits, the version of Fallout 4 they present to Germans will be the same one they pass to everyone else.

This is a not insignificant development: both Fallout 3 and Fallout New Vegas fell foul of censors in Germany, leading to a number entertaining and not so entertaining consequences.

The news was confirmed on the German Fallout Facebook page, and then on NeoGAF.

In the German version of Fallout 3, body parts – whether human, ghoul or dog – couldn’t be shown to come off. That decision was responsible for many of the quirks that fall into the entertaining pile: the impossibility of registering a headshot during the quest entitled ‘You Gotta Shoot ‘Em in the Head’, for instance, or the missing arm “incident” described in Gary 23’s holotape that isn’t reflected on his body.

Less entertaining were the patch delays suffered by owners of the censored releases.

So what’s different about Fallout 4? Potentially nothing. Mortal Kombat X surprised everyone by showing up in Germany as is, perhaps indicating a change of approach from the USK ratings board. And the country lifted its sales ban on Doom a few years ago, after 17 years of restricting the seminal shooter to adult-only shops.

Do you own bloodless editions of any well-known games?