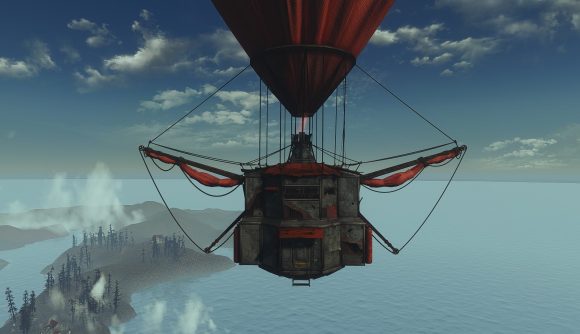 A bunker should be a safe place to escape from it all, to seal off the outside world while things get nasty. One modder has taken that concept to a bit of an extreme by creating what is to my knowledge the first and only aerial bunker in Fallout 4’s Commonwealth.

Held in the sky by a hot air balloon, Mister-Blue-Sky1’s Fallout 4 flying bunker is a showcase in attention to detail. The huge canvas balloon is heated by a large burner on the bunker’s roof, and flanked by two horizontal masts for sails. The balloon, masts, and sails all have ship-shape rigging fastened, and everything fits in with the overall wasteland aesthetic of the Fallout universe.

Mr-Blue-Sky1’s eye for decorating is on display inside the two-storey bunker. Walking through the main entryway hatch, you pass through a foyer lined with shelves stocked with a gas mask and Rad-X before entering a main sitting area. Here you’ll find two sofas and a coffee table, perfect for a game of chess with the pieces made from various bullet and shotgun casings.

You’ll also find a bathroom (which I suppose in this case would be called a head), and that’s stocked with stimpaks and Rad-Away. 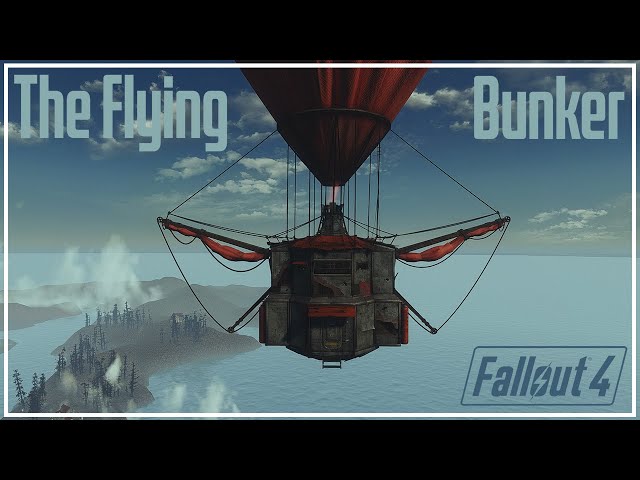 Nearby is the shower, a closet filled with sundry paper products, the power armour repair station, and a kitchen station with a refrigerator and gas oven. The pantry is stocked with such Fallout staples as emergency drinking water, Nuka Cola, Cram, and Blamco Mac & Cheese – enough to stay airborne for quite a spell if need be.

A ladder in the corner leads upstairs, where you’ll find a well appointed workshop for weapons and crafting before entering the captain’s chair, which looks out over the wasteland far below through a pair of wide, tilted windows.

It’s a beautiful build, but there are a couple problems. First, Mister-Blue-Sky1 used some basic 3D modeling tools in addition to the Creation Kit to get the bunker just right, and thus it’s not actually pilotable in game – we’re limited to the video tour for the time being. Regardless of whether he’s able to import it into Fallout 4 for other players to use, it’ll remain stationary in the sky the way the Brotherhood of Steel’s Prydwen airship does.

The second problem is a bit more fundamental: in the Fallout universe, just about everything that doesn’t have claws or tentacles has some kind of firearm, which makes floating around in a big balloon a pretty risky proposition.

Still, it’s a knockout build, and we’d love to visit. In the meantime, here are some of the best Fallout 4 mods.