Following that Halo Infinite gameplay trailer shown at the recent Xbox Games Showcase, ‘Craig the Brute’ has become a beloved and highly meme-worthy member of the FPS games series’ universe. You know the one – the “deadpan” Brute from spotted in the clip, which the Halo community has lovingly named Craig and shoehorned into all kinds of funny scenarios. Now, he’s even playable – kind of. That’s thanks to a new Fallout 4 mod crafted in Craig’s honour.

The aptly named ‘Craig from Halo Infinite’ mod created by HeroicPie and AbiSV draws from a Craig character model resource, which you can check out at Sketchfab here, and, as you can see, that’s definitely him. The glum, grey face, those amber eyes – it’s definitely Craig, though you’ll have to peer a little closely at the images uploaded to the mod’s page, as the now-famous Brute’s face is slightly obscured by a jacket hood.

According to the accompanying details, the mod adds Craig as a Helmet, so it looks like he’s not a permanent character model for your Fallout 4 survivor, as such, but a persona you’ll be able to adopt as and when you like.

To become Craig, you’ll need to head to a chemistry station in The Commonwealth world to craft his likeness as a helmet. 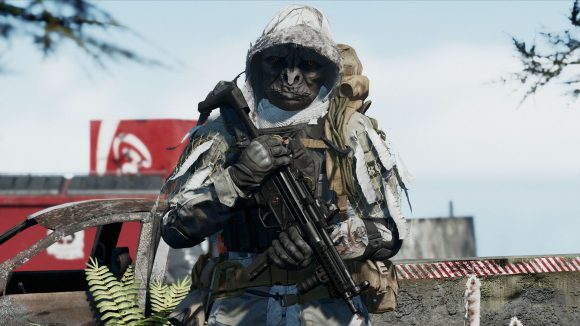 Given head of Xbox Phil Spencer has jokingly called Craig the “new official Xbox mascot”, it seems only fitting the much-memed Brute will live on in one of the best RPG games of our time as well, as well the upcoming FPS game’s world itself.

Head to Nexus Mods here to make Craig a part of your game, and do also check out our list of the best Fallout 4 mods around while you’re here. In other Halo news, 343 Industries has now confirmed Halo Infinite’s multiplayer will be free-to-play following recent leaks suggesting this would be the case.