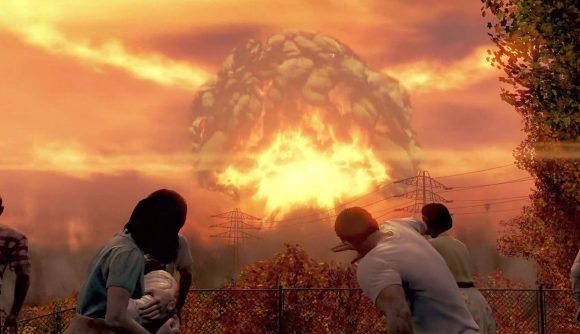 Like the sci-fi series Westworld, Fallout 4 is set in a dystopian, technologically advanced version of America, and similarly features an organisation that can create ‘synths’ – though there are a few more ‘rads’, Nuka-Cola bottles, and mutant monsters knocking about. And Dogmeat, of course. Now, a Fallout 4 fan has brought the two worlds together with a new mod that turns the RPG game’s concluding portion into Westworld.

YouTuber Toro Montana – who has previously created mods for Bethesda’s 2015 action-RPG that turn Preston Garvey into a giant mutant and turn the Commonwealth’s clock forward nine years, for example – has posted footage of the project, titled ‘Let’s Turn Fallout 4 Into Westworld’. It’s a preview of a “synthetic reality mod”, and hinges on a few simple questions: “What if Fallout 4 was more like Westworld? What if the sole survivor was a Gen-4 synth? What if Father’s agenda was a lot more similar to Ford’s agenda?”

It seems the mod lets you step into the shoes of a Gen-4 synth, and embark on a quest suitably titled ‘In here we were gods’ to “discover your true nature”.

Following an ominous conversation with the Mysterious Figure, we see the sole survivor get into a heavy chat with Father – you know, their Institute-leading offspring – and then the apocalyptic game’s modded ending starts to play out. Check out the mod preview footage below:

The modder explains it won’t matter whether you decide to Institute or not, as there is added dialogue to account for both outcomes. Neat.

It doesn’t appear that the mod’s available to grab just yet, but Toro Montana says soon players will be able to download it, so keep a weather eye on their page at Nexus here. In the meantime, you can check out our list of the best Fallout 4 mods if you’re keen to see what else is out there to try.