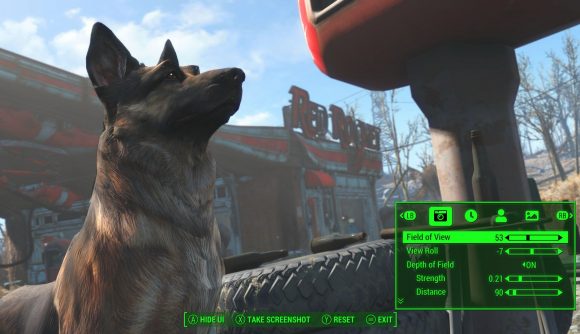 Photo modes are wonderful things, aren't they? Last year, real-life photographers took to the streets and plains of Red Dead Redemption 2 to take gorgeous pictures while in lockdown, while the Cyberpunk 2077 photo mode and Death Stranding photo mode have added a whole other creative dimension to the open-world games. Now, a behemoth of the RPG games scene has got its own photo mode, thanks to a new mod.

The 'Fallout 4 Photo Mode' mod takes inspiration from “photo mode implementations in modern games”, its creator Reg2k/Registrator2000 says on its Nexus page, “featuring custom, brand new UI designed for Fallout 4”. The various features added to Bethesda's hugely popular 2015 RPG include a control to adjust the mode's field of view – “capture intimate close-ups using low FOV, or sprawling vistas with high FOV” – as well as camera tilting and rotation and depth of field options to control its strength, distance, and range.

The Fallout 4 photo mode sounds simple enough to use, too – it can be accessed through the title’s pause menu or by using a hotkey you set, and any snaps you, well, snap will get saved to the game’s photos folder in its installation directory.

Examples included on the mod’s page look pretty incredible, too, with some vivid shots of the lovely Dogmeat up-close, haunting black and white shots, and some dramatic images of the rusty, dusty Commonwealth.

You can grab the mod from Nexus Mods here if you’re keen – just, as ever, mod with caution! And be sure to take a look at our rundown of the best Fallout 4 mods while you’re on this here orange site, too.