Look, I’ll admit it: I never finished Fallout 4. Before you get all uppity about that, and gather to organise my lynching, know that I did finish Fallout 3. Twice, in fact. Know also that I really tried to finish Fallout 4 (sort of). And be aware that it wasn’t my fault that I didn’t. After all, how could I when there was still so much work to be done rebuilding Sanctuary Hills?

Sure, the awkward, towering conglomerate of wood and corrugated metal I constructed was nowhere near as cosy as the House of Tomorrow which once stood on the same location – the building that served as my pre-apocalypse domicile – but it was the closest thing I had to a home.

Don’t get me wrong: I was relatively concerned about the wellbeing of my kidnapped son, Shaun. And was absolutely kind of mourning Nora, the recently murdered spouse I had spent five minutes of wedded bliss with during the game’s preamble. But I had bigger questions to answer. Questions like: ‘what if I could electrify my base and then decorate it with Christmas tree lights?’

As powerful as my ties were to Shawn and Norma, the potential for decorative illumination and an unopposed mayoral appointment understandably took precedence over any curiosity I had regarding their fates. And, as with many misguided leadership bids, mine started with the promise of a wall.

I sealed off half the island, blocking invasion from the river or woods, but leaving a few ruins outside of the boundary – like feet poking out from under a cosy duvet. Sometimes, at night, I would go and stand in one of these ruins and drink in the sense of danger at being outside of my defensive line, thinking about all the good times I’d spent with Shane and Laura. Of course, so early on in the game, no real threats ever presented themselves, but the thrill was still there nonetheless. 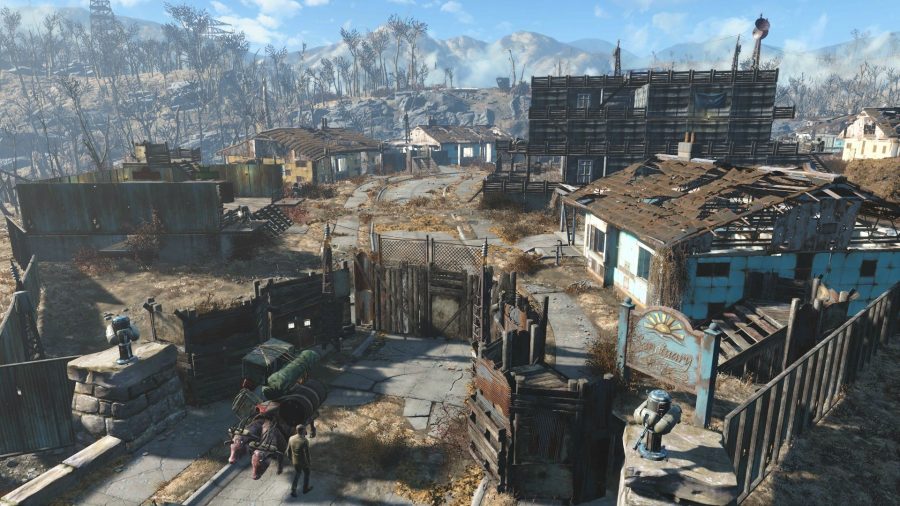 Once the wall was completed, I set about creating viewing platforms, defensive emplacements, and comfortable(ish) bedrooms. Soon enough, the local resources ran dry and I became a sort of one-man ant army, establishing new routes out into the wastelands, stripping the surroundings bare in order to fuel my spiralling architectural ambitions. If it weren’t for this unquenchable thirst for expansion I might never have stepped beyond the borders of my little homestead. As Ben Town grew (I named it early on and it just kind of stuck), the stockpiles of scrap in other parts of the world dwindled.

It became a looming testament to my workshop addiction

Red Rocket Gas Station was the first to fall, of course, and then the Starlight Drive-in. I had a pretty good go at emptying out Concord, too. Each discovery of a new location would be paired with a twinge of buyer’s remorse as I eyed up the potential building plots. But Ben Town had come too far, and promised too much, for me to expend precious resources and time on establishing a new settlement. Those third and fourth storeys weren’t going to build themselves, after all. And what would Seamus and Maureen think of me if I gave up?

Don’t worry, I wasn’t hogging all that respite from the wasteland for myself. By this point, I had a bustling little community, most of them more-or-less content – or at least only slightly miserable. As electricity became another tool at my disposal, an excess of holiday-themed light sources illuminated the hodgepodge silhouette of my fortress, guarded by snipers who were still yet to see any real action – and, presumably, grumbling among themselves about the fact that their mayor was yet to progress the main questline enough to catalyse any. The automated turrets, I suspect, took a more impassive position on the whole topic. 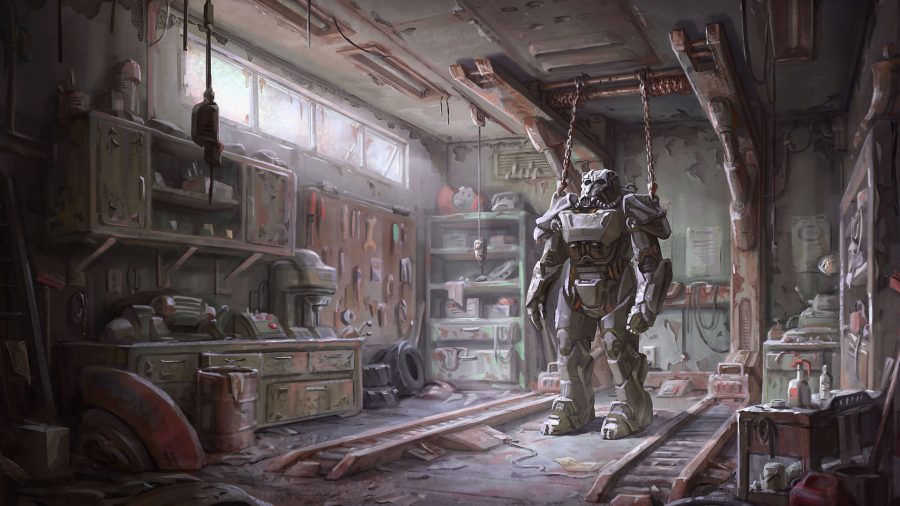 Eventually, I reached a point where I had spent so much time on Ben Town, and so little on anything else in the game, that a sense of surreal dislocation descended. You know that scene in Labyrinth where Sarah – recently drugged – finds herself in a facsimile of her bedroom built in the middle of a junkyard? For a few seconds everything feels almost normal, but when she attempts to leave, the artifice of her situation is revealed as she’s ushered back inside by a gnarled, rubbish-covered old lady.

That is how I felt, holed up in my impenetrable fortress with no prospect of invasion or any meaningful social interactions on the horizon. I began to miss Simon and Margaret, and started to wonder if I’d prioritised poorly.

Ben Town had become a looming testament to my workshop addiction, and it was too late to set out in search of scripted adventures – the siren call of more-recently released games eroded my motivation to commit yet more hours to Fallout 4. And so it was with a heavy heart that I logged out of Ben Town for the final time, and buggered off into new digital worlds.

Sometimes I think back to the pleasant weeks I spent finessing that place. I imagine my loyal, profoundly bored citizens still guarding its unchallenged borders – a monument to my propensity for being distracted from the meat of a game by a good base-building component, staffed by dead-eyed employees who still wonder if I’ll ever return. But worse than that, I am still haunted by the fact that I never did find out what happened to Sergio.