I bounced hard off Fallout 4’s settlement system when the game first came out in 2015. I struggled to get my head around it and pretty much everything I made turned out garbage. This is why I initially thought it was a waste of time and an unnecessary addition to the series. I couldn’t have been more wrong.

When I saw some of the settlements that more architecturally-minded people were creating, my opinion started to change. They inspired me to give settlement creation another go, and it has since become one of my favourite activities to do in Fallout 4.

The creator whose work I admire most is EvilViking13. His builds consistently demonstrate a remarkable attention to detail and push the system to its limits. I reached out to him so he could talk through some of his spectacular settlements, all in hopes of getting a better sense of the scale of his work and what, in turn, inspires him.

What better place to start than Sanctuary Hills?

The Capital at Sanctuary Hills

In total, EvilViking13 has spent over 200 hours building settlements at Sanctuary. His first build, Fortress Sanctuary, was a huge, secure settlement made from wood and scrap. This was then followed by his idea of what Sanctuary might look like five years after the completion of the main quest, as his chosen faction, The Minutemen, started to rebuild the Commonwealth. He used several mods to realise this idea: to repaint houses, remove unsightly weeds, and extend the build limit.

“The new Sanctuary will probably be my most rebuilt settlement,” he tells me “It uses the most amounts of stone and brick, and stuff that you’d have to carefully loot or construct yourself as far as building supplies go.

“I went back to the original Fallout design documents and looked at some of the NCR settlements out west. And if you look at some of the NCR capitals in those early Fallout games, some of those societies are pretty advanced. They have tree-lined streets. They’ve got various solid stone walls. I was like, ‘If the NCR can do it, why can’t we do it here in the east?’. So, I think I definitely pushed the construction materials for the new version of Sanctuary pretty far.”

Highlights include the provisional government building, a water treatment plant, and a custom statue of his character made with the help of a supporter. The effort that has gone into the build is simply stunning. 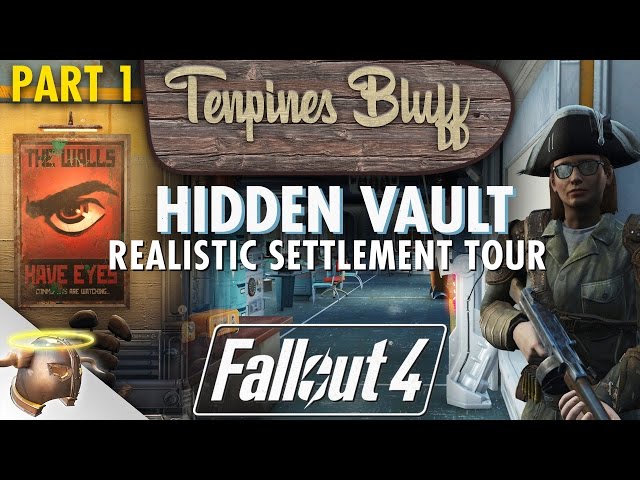 EvilViking13’s Minutemen watchtower, located at Tenpines Bluff, is another incredible build. It took him over 100 hours to create, and uses a great deal of mods to make it possible, including “Place Everywhere,” a hidden door mod, and “Homemaker – Extended Settlements” that lets you place terrain.

The settlement is essentially two separate builds, divided by an undisclosed entrance leading into the mountain. The first portion consists of an exterior watchtower area, complete with cabins and a sniper nest, while the second is a secret vault, containing a cafeteria, lounge, and workstations.

“I’d been wanting to do some kind of underground settlement for a while,” he says, “because I’d seen that one of my mods let me place some of the same bits of cliffside and actual terrain that [Bethesda] can place in the creation kit. I can do it in-game.

Under the hood: Fallout 4 console commands and cheats

“So, I’d been scouting for a while at some of the settlement locations, looking for a nice low spot I could fill in with my fake terrain and maybe add a vault door. Just because you think about your quintessential Fallout moment, [and it] is always the vault door opening, and I thought, ‘What if I do the reverse of that?’, where I create a Vault door that you discover and you go into instead.”

EvilViking13’s builds aren’t always Minutemen focused, however. His Pleasure Island settlement, for example, explores what an adult theme park might look like at Spectacle Island.

“That one was just an absolute blast to work on,” he says. “I actually kept that build completely secret from my YouTube audience. It came from a challenge during one of the Minutemen build tours. [My friend] Joel was like, ‘I want to see what you can do with something that’s just very opposite of your Minutemen character’.

“And so I decided to involve his in-game character into the build and tried to figure out what this crazy post-apocalyptic adult theme park look like, where everything is a money pit and a tourist trap. Where you get stuck on this island of horrors, almost Pinocchio style, but you’re paying caps for the privilege of being there.”

Some of my favourite touches are the Pleasure Palace hotel rooms, the arcade area, and the custom posters and propaganda littered throughout. There are also neat, little jokes around the place, such as the fact the bathrooms cost a lot more than food and drink – a tactic even avid players of Bullfrog’s Theme Park might baulk at.

The final build we are going to look at is EvilViking13’s Underground Brotherhood City, which he built at Vault 88. It’s a unique take on the location, which gives his interpretation of what happened to the Brotherhood after the destruction of the Prydwen in the Minutemen and Railroad questline.

“I’d been sitting on Vault 88 for eight or so months before I started working on it. And I’d seen some really fantastic Vault builds,” he recalls. “But there’s some problems with the in-game lighting and the Vault pieces that came with the Workshop DLC, where the lights are super dim. So, basically, you have to over-light some things, and it never really looks like Bethesda’s Vaults. I decided that, as cool as the location of Vault 88 was, I didn’t want to build an actual Vault there.

“So I was instead like, ‘How crazy would it be if this super high-tech faction that’s been basically crippled by The Minutemen and The Railroad here in the Commonwealth… were reduced to hiding underground?’. Like you’ve fallen that far.”

The best parts of the build, for me, are the bar and dining area, which is highly detailed and features tons of individually placed bottles and food props, and the rundown scrapyard where the poorer occupants can trade junk for caps. The build is a fantastic mixture of some of the more pristine vault tech buildings that were left behind and the messier housing constructed from whatever the Brotherhood could find.