As is the case with seemingly all major game releases now – especially multiplayer ones – Fallout 76 has microtransactions. It’s a disappointing sinkhole the industry is falling further into every day, but thankfully in Fallout 76, they’re not too predatory. The currency is called Atoms and you can spend them at the Atomic Shop, accessible via the main menu.

When you access the Atomic Shop, you’ll be greeted by a number of categories, each containing different items you can buy with your Atoms. The appeal is that everything you can buy in the Atomic Shop is attainable through normal play and thankfully they’re all cosmetic. You can purchase everything from new emotes and paint schemes for your Pip-Boy, to decorations for your C.A.M.P. and even new outfits like a set of striped pyjamas.

You can purchase Atoms with real money. One Atom equates to roughly one US cent, and you can buy increasingly large supplies, for increasingly large discounts, as is the case in most currency shops. 500 Atoms are $4.99, 1100 Atoms are $9.99, 2400 Atoms are $19.99, and 5000 atoms are $39.99. You can’t purchase more than 5000 Atoms in one transaction but if you want more then you can certainly keep spending.a

If you don’t want to drop your hard earned cash on cosmetics for a game where you rarely run into other people, you can also earn Atoms in-game via challenges. We’ve been playing solidly for the past three days, we’ve amassed 800 Atoms, which is still 1000 Atoms short of the most expensive item in the Atom store.

You can complete Atoms challenges in order to accrue this currency in-game, and you’ll complete the majority of these challenges simply by playing the game. We’ve not done anything specific to build up our Atom total since they’re earned as rewards for wide range of activities, ranging from basic tasks you can complete as soon as you leave Vault 76 to endgame content. For example, just exploring Appalachia for an hour will earn you 10 Atoms, as will equipping a Perk Card, and collecting a Bobblehead, Holotape, or Magazine. 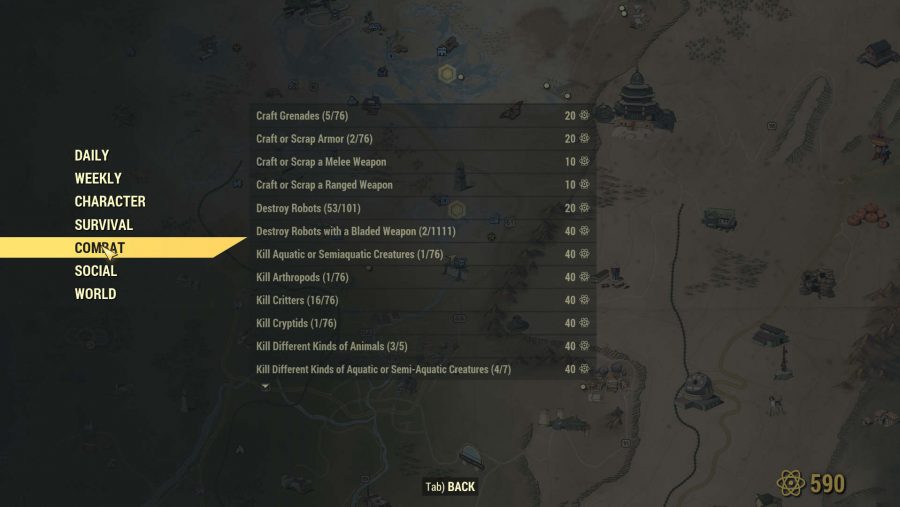 On the other hand, you can earn 40 Atoms for much tougher challenges like destroying 1,111 robots with a bladed weapon and completing 76 quests. Some challenges even go up to 80 Atoms each as a reward, such as acquiring 22 different kinds of diseases, and finding 17 of the Overseer’s Logs. There are plenty of ways to earn Atoms, so unless you want to buy out the whole catalogue of items in the Atomic Shop, there’s no need to drop real money in there.

All of the challenges are split up into different categories so you know exactly what you’ll be aiming for. The combat section is all about killing different types of enemies, from animals and aquatic creatures to robots and cryptids – mythical creatures like the Nascent Snallygaster and Grafton Monster. Meanwhile, under the survival tab, you’re looking at harvesting fruits and berries, learning new recipes, and collecting wood. There are challenges for everyone to tackle, whether you’re a nomad hunting down all the creatures in the game or if you prefer a more docile lifestyle, but the best way to earn this currency in bulk is to keep exploring, whether that’s finding new areas or using weapon types you’d normally avoid.

It’s worth noting that not all challenges reward you with Atoms – some will give you a pack of Perk Cards – so if you’re only interested in earning Atoms you should check the challenges section of the main menu to see which ones have an atom symbol next to them and focus on those. 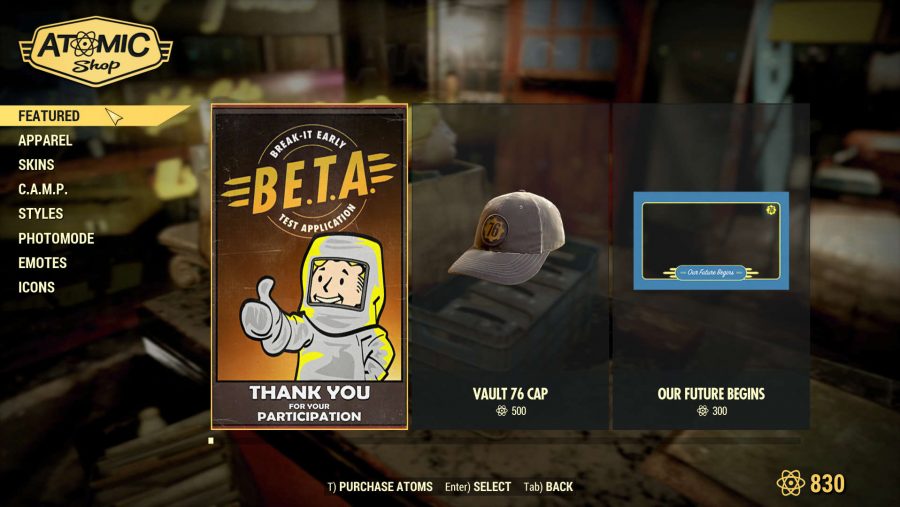 Don’t worry about running out of challenges to complete. You’ll receive daily and weekly challenges that replenish, each with decent rewards. The dailies tend to be much more simple – crafting a piece of chest armour granted us 10 Atoms, as did levelling up. The weekly Atoms challenges are slightly tougher because you’ll usually have to go out of your way to achieve them, but so far we haven’t seen anything that will leave you scratching your head. For 40 Atoms, we were tasked with taking five photos near Vault 76, or for 20 Atoms, we had to learn new recipes or plans.

If you’re just getting started in Fallout 76’s vast Appalachia wasteland, don’t worry about these challenges from the get-go. Follow the main quest down to the Overseer’s Camp, visit Flatwoods, and kick off your voyage outside of Vault 76 the way you’re meant to. Due to the open-world nature of the game and ability to fast-travel to any location you’ve already visited, there’s plenty of time to tackle your incomplete challenges later on down the line. When you eventually take a look at them all you’ll probably be surprised to see that you’ve already completed a large majority of them.

Fallout 76 is a game about exploration and discovery so follow your quests, explore the world and, tackle events as you come across them. When you’ve got specific things left to finish, revisit those areas to earn a few more Atoms. Combine that with your daily and weekly challenges and before long, you’ll have stacks of Atoms ready to deck out your character and C.A.M.P with the best cosmetic items.

Here’s an example of the daily Atoms challenges: 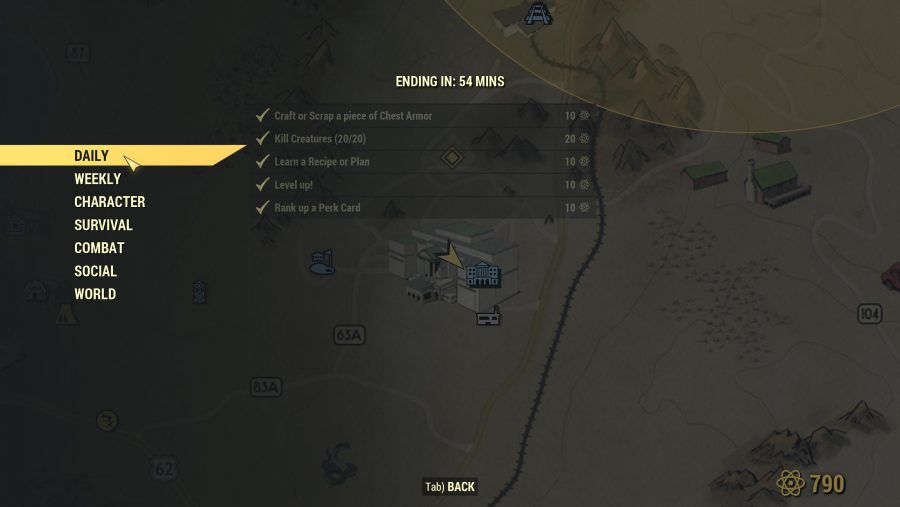 As you can see, these Atoms challenges are very easy to complete and will reward you with a total of 60 Atoms for your efforts, which isn’t a huge amount.

And here’s what you can expect from the weekly Atoms challenges: 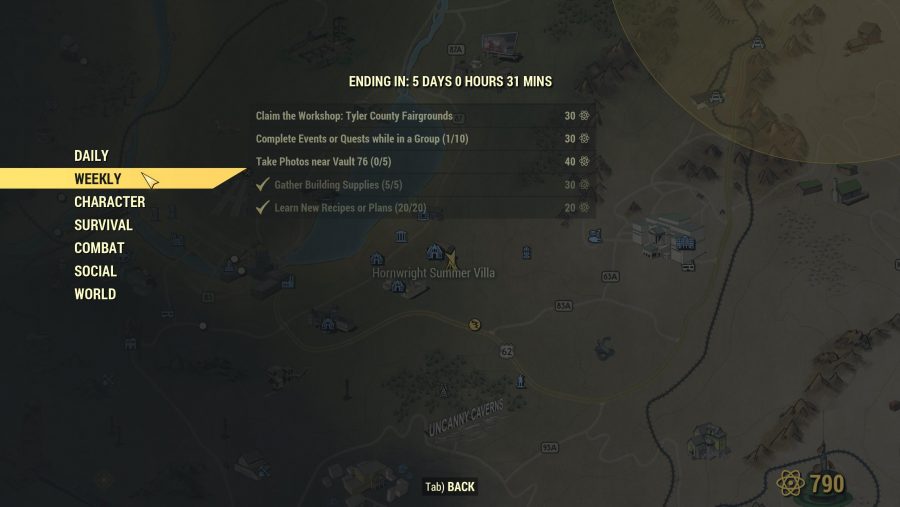 The total from this set of weekly challenges is 150 Atoms, so if we add all the daily and weekly rewards together we can earn roughly 570 Atoms, which is almost enough to buy an item from the Atomic Shop. It would seem that diligent players will be able to earn a new cosmetic from the store every couple of weeks.