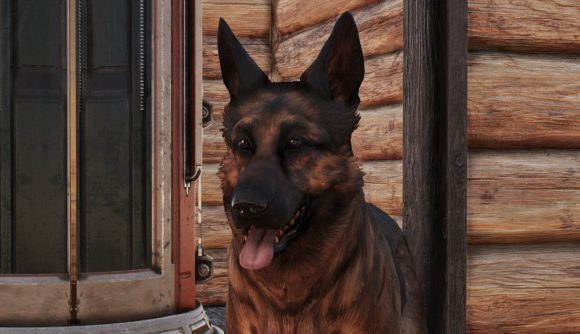 Fallout 76’s new season started up last week, and if you’ve been following along, you’ll probably have noticed the F.E.T.C.H. Collectron reward way up at level 98. A dedicated modder has spent the weekend grinding away at the pass and has already modded the MMO’s dog-shaped automaton into something a bit warmer and more familiar, our old canine pal Dogmeat.

The ‘Faithful Electronic Trash Collection Hound’ is a RobCo item for your C.A.M.P. that collects electronic scrap. It lives in its own little (robo) dog house and “is programmed to always be happy to see you”, Bethesda assures us. Be that as it may, it’s nice to have a big of fur on that loyal face, and the Dogmeat Collectron Replacement Mod swaps out the F.E.T.C.H. collectron’s model with that of companion Dogmeat from Fallout 4.

The very good German shepherd will hang out on your porch (or wherever in your C.A.M.P. you place is house), and greet you whenever you return. The mod also includes Dogmeat’s original sound assets, so you won’t hear the tinny RobCo bark from the splendid pup.

Modder JayBobGamerZz explains on Reddit that he spent hours grinding scoreboard levels over the weekend so he could unlock the F.E.T.C.H. Collectron just to test the mod, and that it does indeed work – so long as you’ve put in the time or level-ups to earn it, that is.

To get it, head to Nexus Mods and follow the instructions carefully. Then you’ll need to knock out however many levels you need to reach rank 98 on the new season six scoreboard, The Unstoppables vs. The Diabolicals.