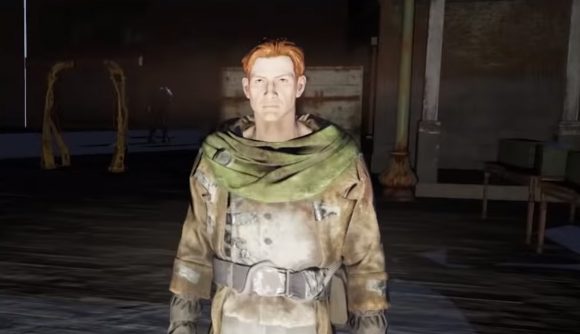 Fallout 76 doesn’t have human NPCs – at least none that you can interact with through normal means. But players have managed to work their way into a hidden developer room, which houses what appears to be the single exception to that rule. Say hello to Wooby, the only person in West Virginia who didn’t emerge from Vault 76.

Wooby lives in the game’s developer room. You might be familiar with the concept of that room from Bethesda games – these rooms contain every single item in the game, and in titles like Skyrim and Fallout 4, they’re easily accessible by cheating through the console. Given Fallout 76’s online focus and prohibitions on cheating, you’re not supposed to get into the dev room used here.

But that didn’t stop enterprising 76ers from getting in anyway, as Eurogamer reports. There, they’ve found the game’s most powerful weapons, including stuff that hasn’t even been released yet – pointing toward new items likely to be released with incoming updates. Given the possibilities this room opens up to cheaters, those who’ve gotten in have been reticent to share the methods.

Whether or not players are taking advantage of the items they find in the dev room, it seems Bethesda is taking steps to ban those who’ve gotten in. Players have gotten messages warning that “a character on this account appears to be in a corrupted and/or unusual state at this time,” typically within a day of accessing the room. That note comes alongside a temporary suspension – and a request for details on how they got into the room.

Those immediate lockdowns are perhaps understandable, given that it appears many have using this room along with item duping glitches to do some nefarious business. That includes mass resales on items on the grey market, according to Eurogamer’s anonymous sources.

As Wooby himself, it doesn’t appear that he’s an indicator of future NPCs getting added to the game, considering how little interaction you can have with him. More likely, as Eurogamer speculates, he’s intended as a target dummy for the weapons in the dev room. But hopefully nobody’s abusing Wooby too much – after all, he is the last of his kind.