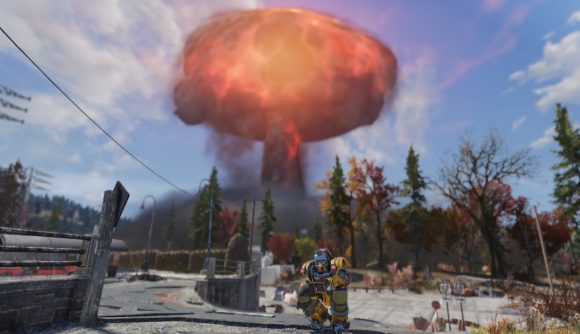 On the January 1, 2019, Bethesda achieved complete nuclear disarmament in Fallout 76 – disabling nuclear silos and preventing players from launching nukes. Before you start to feel all warm and fuzzy inside, we must regretfully report that this state of peace is not due to pacifism but instead due to a bug. Because, of course it is.

It appears that in the weekly reset, players received duplicate nuclear codes from the previous week, meaning that they were unable to launch any nukes at all. Rather than some festive act of goodwill to all men, this was very much unintentional, causing Bethesda to disable nuclear silos while the studio investigates the issue.

A hotfix is expected to launch later today, but for the time being, West Virginia is nuke-free. It’s yet another in a long string of bugs, glitches, and controversies for Bethesda’s ill-fated MMO which has received countless updates since launch attempting to patch up the game’s many problems.

While the unintentional state of nuclear disarmament may seem amusing to many of us, launching your own nuke was one of the few tangible goals to strive towards in 76, and to have that very feature go AWOL is a bit of a drag to many players.

In more positive news, Bethesda has confirmed that it is still hard at work on updates for 76 in a blog post. The post confirms that the much-requested player vending functionality is on the way, along with a new PvP mode, new vaults, and new in-game events.