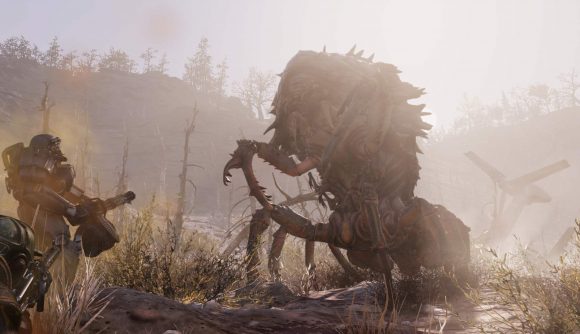 Earlier this month, a group of Fallout 76 players showcased an especially egregious display of harassment in-game by hunting down and eliminating others while saying things like “we have come to eliminate all gays.” Bethesda has issued a lifetime ban for the players involved – though since the report player function was broken at the time, action came only after a video of the incident hit social media.

Fallout 76 has proximity voice chat for all players – an effort by the developers to encourage social interactions among players. You don’t need to have been on the internet for very long to know that opens a major avenue for abuse.

A lengthy report from Eurogamer runs down the details. Basically, a user named NathanTheHicc approached a group for a Disease Cure item. One member of that group, AJ, says “the three of us were having a good time and talking to him and then one of us commented on his character or his characters outfit being cute. He replied, ‘I don’t fuck with that homo shit’ and left.”

NathanTheHicc returned shortly afterward with a group of his own, and they all began attacking AJ’s group with promises of “cleansing the wasteland of the queers.” If you have the stomach for it, you can see a video of the incident below.

Called themselves the "gay eliminators" "cleansing the wasteland of the queers" "know what we did to your people back then, we killed them" THIS is the stuff said to us tonight when playing Fallout. @bethesda @BethesdaStudios @Fallout #Fallout #Fallout76 pic.twitter.com/zwPuz7AbsG

Eurogamer also got a comment from NathanTheHicc, a high school student who says “I don’t hate gay people” and characterizes the incident as “playful immaturity.” He also adds “I do not regret the incident. I will not apologise given the opportunity.” He has a video of the incident on YouTube, too – under the title ‘cleansing of the queers.’

After an initial three-day ban, a Bethesda rep says “We have now permanently banned the players we’ve identified.”

Fallout 76 does not offer an in-game report option. You can block interactions with specific players, but that doesn’t lead to further action in extreme cases like this one. Instead, you have to file a ticket with Bethesda’s support site to make a report. When this happened, that site wasn’t even functional.

Some Fallout 76 players have shared plenty of stories about how nice their fellow explorers can be, but it remains a tremendous disappointment that those anecdotes are more shocking than this one.